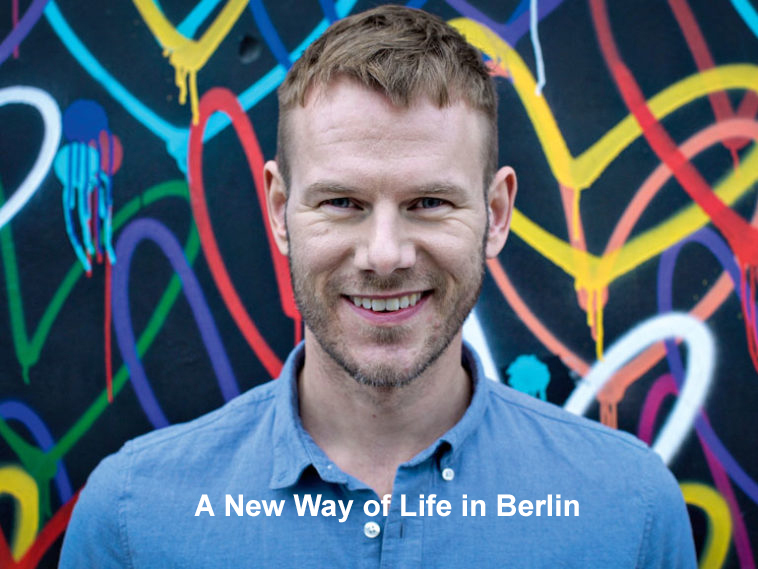 Tom, your new song “Without You” is about that special feeling when you go out to party in the evening and get to know someone. What does that mean to you?

It’s a great feeling and certainly familiar to many. Especially when you are on the go, travelling around, exploring new places and cities, you experience it again and again. My boyfriend and I met this way too.

How did it happen?

That was almost nine years ago! I had travelled to Oslo for a concert. After my performance, I went to a gay bar with a buddy. My boyfriend and I met just before the lights came on and the party was over. I never thought that would happen that evening. It was a very special and beautiful moment.

You moved to Berlin a year ago. In this city you can follow your heart, be free and “different”, you write on your homepage. In which way?

This can be seen in different ways. For example, the acceptance of LGBT people is very high. You can feel it not least in the bars and clubs. There are so many gays in the city that the audience is often very diverse. So it never really bothered the straight men if they were spoken to by a gay man. Dealing with each other is very relaxed, which has a liberating effect!

But the Scandinavian countries are also considered to be very open?

Absolutely. As for Norway, the country is liberal and progressive overall, but it doesn’t look the same everywhere. I come from Kristiansand, a relatively small and rather religiously conservative town. There are just not very many people there who are not in straight relationships with children. This is another difference to Berlin: Here, many people organize their lives in a different way. But this has nothing to do with sexual orientation – the majority of my heterosexual friends also lead an existence outside the conventional, classic pattern.

How do you explain that to yourself?

Among other things, it may be because most of the people don’t earn very much here. When you have a lot of money you tend to organize your life differently. You then think about redesigning your living room or buying a new car, to put it bluntly. As a musician, my payday is not that big, but in Berlin it doesn’t differ from the others.

You rave about your adopted home, Berlin. Is there anything you miss about Norway?

On the one hand, the closeness to nature. The forest and coast were right next to the front door of my parents’ house, that definitely shaped me. On the other hand, of course, I miss my family. But since I do a lot of concerts in Norway, I see them quite often. What I also like about home is the fact that I can walk down the street and always meet people I know. Although I have to say right away that the anonymity of a big city also has a lot to offer.

You mentioned gigs in Norway – are you better known in your home country than in the rest of Europe?

Absolutely. Here in Germany and in other European countries, I am starting all over again, so to speak. But that’s pretty cool, you can start from scratch.

You identify as bisexual. Occasionally one hears the statement that bisexual men are “actually gay” but feared a “complete” coming out. Did you have to listen to that too?

After I came out, it wasn’t always easy at the beginning. Some people still think in black and white and struggle with it when someone cannot be strictly divided into one category or the other. I’ve also heard of studies that showed that bisexuals were a less popular group than homosexuals or heterosexuals. In Norway in particular I was asked again and again: “Okay, what are you really now?”

Something like that happens much less often here. That’s great, I’m not a fan of labels. It is all the nicer to see that young people in particular are increasingly flexible in dealing with their sexuality and identity. I am convinced that we all have different sides and that we can also change.

How is bisexuality expressed in you?

I had several girlfriends by the age of 27, and that fitted. The feelings I had then were genuine and real. But an important part of me was lying idle, and I feel happier today than I did then. I still find women attractive, but I prefer men.

In other words: I could live with not seeing any more breasts. Without the male equipment, it would be a lot more difficult (laughs). That probably has to do with the fact that I’ve been in a relationship with a man for nine years. I’ve just gotten used to being with a man that I pay less and less attention to women in that regard.

How did you celebrate the fact that Germany opened up marriage to same-sex couples?

We went out! It is really very nice that Germany has followed the example of other countries and that marriage is now possible for everyone. I am especially happy for those people who have fought for this success for years.

You are not only a singer but also a songwriter. What is the songwriting process like for you?

Most of the time I get the songs. Sometimes I wake up in the morning and just have part of a melody in my head. Then I get up immediately, pick up the melody and form a whole song out of it.

You also write songs for other artists. How do you decide whether a song should be for yourself or for others?

Sometimes I notice that the song doesn’t really fit my voice and would sound better if someone else sang it. The content can also be decisive: if the lyrics have a personal meaning, then I won’t give the song away. Often, however, I also receive commissions from other producers or artists. In these cases, I just sit down and try to create what the client wants.

will also receive instructions as to which direction the song should go.Exactly. For example, I keep working for a Japanese record label. It can happen that you want a romantic ballad or a casual, fluffy summer song, or that you specify certain content-related topics. In such cases, the work process is similar to baking a cake. I know how the cake should look and taste. The development of the exact recipe is up to me.

What are your musical plans for the next few months? Are you working on an album?

To be honest, I’m still undecided about this (laughs). I don’t know whether I want to do a whole album or just put out individual singles. I’ve written quite a few songs that have not yet been released – so making a new record for autumn or Christmas would be a good idea. Just take a look!

I read that you wanted to be a musician when you were four. Could you imagine doing anything else besides music?

Like many artists, I have already thought about this question. Anyone who works creatively almost always comes to the point where you start thinking about the future. I could become a teacher, maybe I would be too impatient (laughs). I also love to cook! I realize that the job of a cook is very exhausting and tough. But should I ever get tired of touring from club to club, then maybe I will open a “bed and breakfast” in a warmer country. Then I become an old man with a big belly who is constantly preparing food and drinking wine (laughs).

You have a day off: how do you spend it?

It is very different. When I’m in Norway, I go out into nature. My father owns a 200-year-old farm in the middle of the forest, and I really enjoy staying there. At the same time, I’m a festival fool! When you visit music festivals that last several days, you immerse yourself in a world of your own, in a kind of parallel universe where you can spend time with friends and listen to bands. I like it best when I can just get on with the day in my free time, without plans or a strict program.