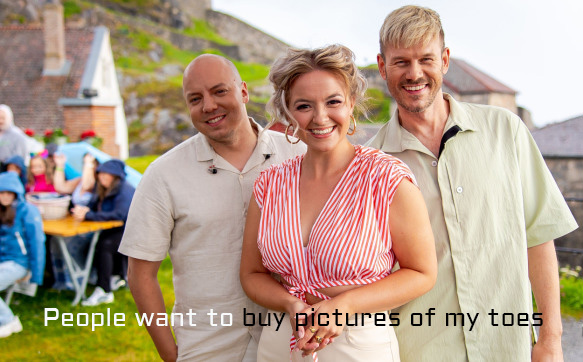 People want to buy pictures of my toes

This summer’s penultimate program of Allsang på grensen is next. This time it is, among others, Alexandra Rotan (25) and her band KEiiNO who enchant the audience with “Monument” and “Spirit in the Sky”.

Despite her young age, Rotan has already managed to tour with Alan Walker (23) and reach the top with KEiiNO in the Melodi Grand Prix in 2019.

The 25-year-old and the other band members, Fred Buljo (33) and Tom Hugo Hermansen (41), were in the lead after the MGP victory and the Eurovision Song Contest, but then the pandemic crept in.

– It was empty and it was difficult. I’m very glad I had Tom and Fred to talk to during the period. We had so many plans. We were a newly started band and we were going to release an album, we were going on tour – we were just going to continue where we left off in 2019, Rotan tells TV 2 ahead of the Allsang performance.

– It was like pointing the finger at the jury

One and a half years later, the situation is fortunately quite different. These days, the band is touring around the country and writing new music.

– It’s so nice to be up and running again. We have a good number of concerts up in northern Norway, so it’s absolutely fantastic. I feel that now I am happy, now I am where I should be, she says.

In this year’s MGP, Rotan and his bandmates had to see themselves beaten by TIX (28), but the singer takes it all in with a smile.

– We were there because we wanted to be able to represent Norway again, but that’s how it is. Life happens, and sometimes it does not go the right way, but we still go out with our heads held high, and are very proud of the achievement we made in MGP.

Current in Battle of the Stars

New adventures await the pop star this autumn. The KEiiNO vocalist will fight for the victory in the NRK program Stjernekamp (Battle of the Stars).

– I’m looking so incredibly forward to it. It will be an educational period. I really hope that I get to get as far as possible and at least get to experience joik. Because I have the best teacher (KEiiNO-Fred, journ.anm.) Of them all to be able to teach me, if I were so lucky to get this far, she says.

– It has always been a dream to be in Battle of the Stars because I love to be on stage. And here I actually get the opportunity to just throw myself into something I have no idea about. Hopefully I get to be on stage many Saturdays, and not least entertain an audience and challenge myself.

Rotan hopes that the singing competition can make her more robust as a singer and person.

– I would like to grow and become better at accepting constructive criticism. I’ve always been a little sensitive since I was a little girl. If someone said something that was a little critical, I could often perceive it as much worse than it really was. And that’s a bit still, she admits, and continues:

– I think that in Star Wars there are things or genres I have no idea about at all, so here I must dare to accept criticism, and dare to make mistakes. I believe and hope that it will be a nice journey I can grow on.

In a hectic life as an artist, the Råholt-woman has little time to find love. Rotan shares with TV 2 that she has extended the dating ban the manager gave her in advance of the MGP participation this year.

– I continued the dating ban because I simply do not have time to date and I have enough with what I do now. I so want to travel around the world and not date – not yet at least, she says, and continues:

– Maybe “prince charming” comes crashing down from the sky at some point, and then it happens.

Rotan makes no secret of the fact that she receives a number of inquiries of various kinds.