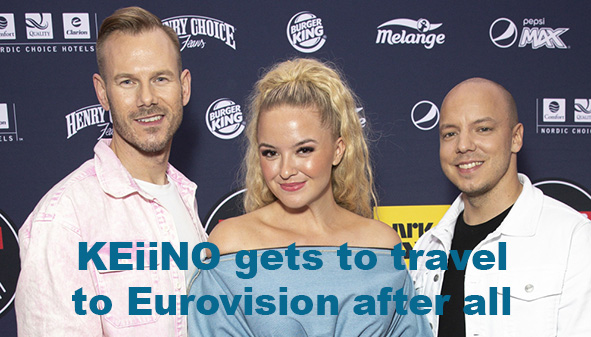 This year’s second place in the MGP travels to Rotterdam on Tuesday.

After the confetti had settled on the floor and the roars of victory had subsided in the hall, it was clear in February that it was Andreas TIX Haukeland (28) who could start the preparations for this year’s Eurovision Song Contest.

In the eternally sour second place was KEiiNO, with the heavy message that they were not allowed to represent their home country in the fierce competition.

However, on Tuesday, the band travels down to Rotterdam after all, and on Friday they perform in front of thousands of people online at the Eurovision Village. Thus, they also just manage to get the first semifinal to Norway.

– It feels absolutely fantastic. We are so ready to be on a stage again and delight the fantastic Eurovision audience, and we will sing for people from all over the world, so we look forward to it, Alexandra Rotan (24) says enthusiastically to Se og Hør.

Se og Hør has in fact had a chat with two-thirds of KEiiNO, since third party Fred Buljo (33) was out of power on the phone, and there are some very happy artists who tell that they will perform in relation to the Eurovision on Tuesday – despite the second place and MGP.

– Many people have a relationship with the Melodi Grand Prix in Norway, but the unity that is among Eurovision fans in the world I think is quite a lot bigger than many here at home know, says Tom Hugo (41), and adds that they are invited because they received the most viewer votes in 2019.

– It’s incredibly fun. It just shows that they are doing something more than just the competition. In the concept we are going to be part of, no one is voted out – it’s just too much fun, he continues.

Alexandra says that when they last performed in Eurovision Village, there were more than 20,000 spectators present.

– It will be more of a concert experience – even if they are not in front of the stage but watching the virtual concert online, and it is absolutely fantastic, she adds.

The journey also comes at a perfect time, as the group this week released the song “Summer of my Life” – which is a tribute to the summer of 2019 when you could dance close and hug each other.

Despite the fact that second place came as a slap in the face to several of the fans, KEiiNO itself is left with only good experiences.

– The whole experience was absolutely fantastic, also to see how well “Monument” was received and how well it has lived afterwards. It still streams a lot and we get daily messages from people who really love the song.

However, Tom admits that it felt a little hard the first few days after the victory slipped.

– Do you feel a little that you were so close to winning?

– Absolutely. We love Eurovision, which is why we wanted to participate again. But of course, as Tom says, it will just be nice to travel to Rotterdam anyway and sing “Monument”, Alexandra admits.

– I think it would have been worse if we had not been there before. I would love all artists and songwriters to join Eurovision, because it is a fantastic experience. We participated to win the competition, but when we did not win in Norway, we wish TIX to all possible good luck and happiness on the road and hope he gets an equally good experience as we had when we stood there, Tom adds.

– What do you think about TIX’s chances of winning?

– It is very difficult to predict because there are so many good songs this year, and so many different genres that are represented. As the “die-hard” Eurovision fan I am, it will be a very exciting night anyway, Alexandra admits.

When it comes to a possible comeback in the MGP and Eurovision context, KEiiNO chooses not to be too bombastic.

– We have said that this was the last time … Or, did we ever say that?

– I think we chose not to say it specifically, but that is not the first thing we think now.

However, they state that we will not see the group on the MGP stage next year, and point out that they are very proud of what they have done previously in the Melodi Grand Prix and Eurovision.