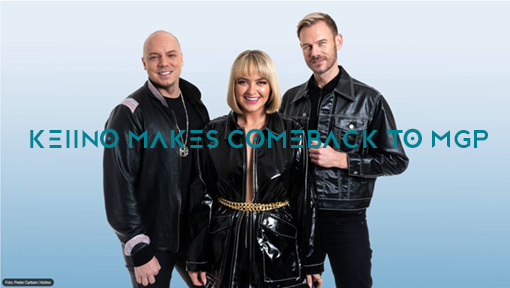 KEiiNO won the Melodi Grand Prix in 2019 and received the most audience votes in Eurovision. Now they are back with a song they think could take them all the way to the top in Europe.

– We are ready to show a new KEiiNO, says Fred Buljo, Alexandra Rotan and Tom Hugo Hermansen, better known as the group KEiiNO, almost in unison to Dagbladet.

In their first interview, after it became known that the group is making a comeback in the Melodi Grand Prix, with the song “Monument”, the trio says that they feel more connected since the victory in 2019.

– We were thrown into it without knowing each other so well. We were born during the MGP, but now we have travelled and entertained the whole world together. Now the balance between us is perfect, says Tom Hugo Hermansen.

One may ask why the group would throw themselves into the Grand Prix circus once again, given the great success KEiiNO experienced after the victory in 2019. The group received the most audience votes of all during Eurovision 2019. “Spirit in the Sky” was the world second most viral song on Spotify, it was on the charts in several European countries, topped the VG list and was nominated for Spellemann for Song of the Year. The falling height is large.

GREAT SUCCESS: KEiiNO was a huge success after receiving the most audience votes in Eurovision. Now they want to go all the way to the top, with a song they like better. Photo: Christian Roth Christensen / Dagbladet

– We like “Monument” better than “Spirit in the Sky”. It’s different. You do not win Eurovision with a song that is as easy, and this song binds KEiiNO more together. In addition, Fred gets to show off his Sami rap, says Rotan.

– We would join the Grand Prix again when we had the right song. If there is one song that will be our legacy in the MGP context, it is not “Spirit in the Sky”, but “Monument”, Hermansen adds.

Fred Buljo originally has a background as a rapper. In 2008 he participated as part of the rap group «Duolva Duottar» from Kautokeino participated in «Norwegian Talents». The lyrics were in Sami. The first time Buljo went out on a joik, however, was through KEiiNO.

– I have personally become more Sami through KEiiNO. It was the first time I dared to joik. It has been very good to be able to contribute to the belaying of Sami culture. We are often put in pigeonholes by the ordinary man in the street, I think, and one thinks Sami music is just joik, says Buljo.

– We modernize the Sami culture, and I feel Sami music has come a long way. For me, it is very nice that we can open up for people to get to know modern Sami culture, he continues.

He himself was shocked at how well the joik in “Spirit in the Sky” was received in Europe.

– It warmed my heart. In addition, many had surprisingly good knowledge. They knew an enormous amount about Sami culture, says Buljo.

– Many have started studying Sami after our participation in MGP and Eurovision, Tom Hugo Hermansen adds.

– Yes, I even got two reindeer on the plateau, says Alexandra Rotan and laughs.

As with most others, all of KEiiNO’s plans for 2020 were cancelled, but the group still felt lucky last year.

– Most of our plans went west, but it was also the year we released the debut album and had time to write lots of music. We had a very active 2019, and therefore had enough money on the books to make ends meet, says Hermansen.

As is well known, last year’s final of the Eurovision Song Contest was cancelled due to the corona pandemic. It is still far from certain what the international final will look like, and whether the travel restrictions in Europe will last until May. KEiiNO is nevertheless sure that they have a great advantage if they become Norway’s representative.

– We have done this promo round before, where we have travelled around and met Eurovision fans. If we win here at home but are not allowed to do promotion in Europe due to restrictions, then it is not a crisis for us. We’ve done it before. Now we just hope that the Norwegian people like our song, because we want to win, says Alexandra Rotan.

KEiiNO is pre-qualified for the final of the Melodi Grand Prix, which will take place on 20 February.