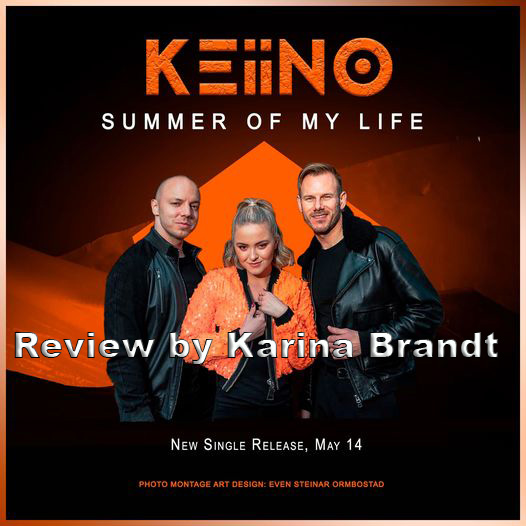 Thursday evening the 13th of May, some of us members of the KEiiNO Fangroup Official and the KEiiNO’s Sunbeams group sat benched in front of our computers or phones, waiting for Alexandra, Tom and Fred to appear in the announced zoom meeting for members of these two groups. Of course, the same second they appeared on screen, the laptop I was on, decided to go black, so I missed out on the first five minutes of the meeting. What a bummer.

During the zoom meeting, we were treated to a snippet of the new song a few hours before official release. (It has its advantages of being a member of the fangroup :o)

I fell in love with the song immediately. What we heard was so beautiful, so light and happy and hair-raising that the expectations for the rest of the song immediately raised. Alexandra’s light and slightly vibrating voice mixed with Tom’s crispy voice always bring out a perfect blend of sound and gives a wonderful feeling inside. Fred brings out a beautiful joik we have heard before, for example in this video on Youtube where he explains what joik is and how it CAN sound. Personally, I am very happy to now have it in a song so I can hear this beautiful joik more often, so thank you, Fred :o)

A few hours later, one minute past midnight, The Summer of my life was released and like expected, the rest of the song was equally wonderful and thrilling. The soundscape of this song is so clear and fresh and brings out the feeling of being out in a summer breeze with the sun shining brightly from a clear blue sky. I keep getting the feeling of looking into the summer sky and just twirling around, feeling like a happy child enjoying summer.

There is a bridge in the song, where the soundscape changes into a digital warp, a sound I have spent two days in trying to remember where I knew it from and just now it hit me – Laura Pöldvere’s Waterfall. Laura Pöldvere represented Estonia along with Koit Toome in 2017 with the song Verona and they are some of my big idols along with KEiiNO, so this little thing that may not mean anything to others means the world to me. Almost the same ‘sound’ in a song from both my big idols.. How lucky can an old woman be?

The Summer of my life is looking back to the summer of 2019 where Covid-19 was not even a thought yet, to many people, life was easy, they were social, alive, a life filled with joy and good experiences, KEiiNO had found big popularity amongst fans and were travelling all over Norway, Europe and the world, to perform in front of fans worldwide.

Then Covid-19 came and everything changed… and you know the rest.

Thank you, KEiiNO, for bringing us fans yet another beautiful song. You never disappoint.