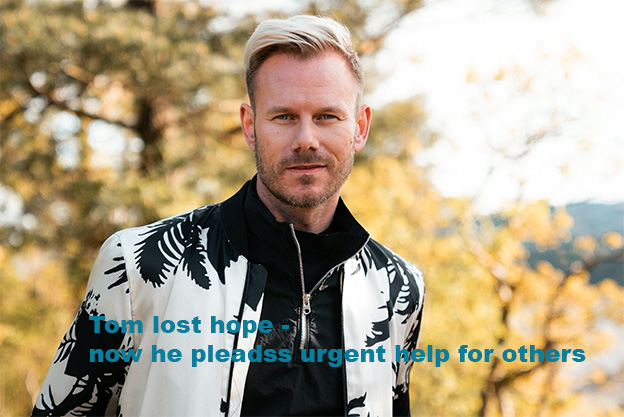 Now he pleads urgent help for others

The 41-year-old is very concerned about everyone who is struggling mentally, when they now enter a new dark period in more than one way.

In an article in VG, the KEiiNO star says that he speaks from personal experience when he knows how difficult the meeting with the public sector can be, when the need for help is greatest.

“It’s not my sick culture brother I’m crying for. Among us musicians and artists, there are plenty of voices that like to be heard. On the other hand, I think there is too little talk about those who consider whether life during the pandemic is too difficult to live. It can be about life. Young lives “, he writes and continues:

“Since March, three acquaintances of mine have made a final decision with death as a result. Two of these lived in a big city where both the workplace and the social circle were closed down by restrictions ».

– Who do you want to reach with this article?

– The group of politicians who sit and make quick decisions. To limit social contact in municipalities without infection, is perhaps to shoot sparrows with a cannon, says Hermansen to VG.

– So you think the restrictions are too strict?

– I have no precondition for saying what is right or not. To stay sane, one must have confidence. So I have faith that this is well-founded. But the measures must be supported by figures that show why it is important, says Hermansen, who believes that politicians do not capture all weak groups.

Read the health authorities’ answers further down in the article.

Hermansen emphasizes that it is not the actual closure of society that he criticizes, but the system which is to catch those who are affected by it. All who are involuntarily alone, all who have gloomy thoughts and anxiety as a result of the corona crisis.

– Although we understand that the spread of infection must be limited, I think there is too little talk about those who can not bear to look forward to the “Christmas with the extended family”, which the Prime Minister wants us to keep in mind when we enter a new period of limitation of social contact.

In March, the Kristiansand man, known under the artist name Tom Hugo, lost for the first time in his life the belief that, “everything will be fine in the end”. He became depressed and consulted a GP.

There he was told that the waiting time in the public psychiatric service was so long that a referral to the district psychiatric centre (DPS) would not help much.

– Coincidentally, the doctor asked me if I had private health insurance. And quite spontaneously I had drawn one like that the year before. It turned out that psychological help was included in it. In that sense, it was just luck that I got help quickly, says Hermansen, who today feels much better.

But he knows many who are not as well off.

– The burden of the national charity event is still not borne equally in round two. What is a small sacrifice for some is the very basis of life for others. Quick psychological help must not only be reserved for the lucky ones who have money or private health insurance.

In January this year, VG wrote that the waiting time in mental health care is on average 47 days for adults and 50 days for children and young people.

– We must increase the focus on mental health. It is urgent, says Hermansen.

– Not only for those who stand on the edge of the precipice, but also for those who struggle, but are afraid to take the place of others in the long queue. It is not a lack of psychologists, but a lack of legal authority in the public sector.

– Useful to ask for help

Maria Jahrmann Bjerke (H), State Secretary in the Ministry of Health and Care Services, tells VG that the closure in March led to many people having their services reduced for a period.

– The Norwegian Directory of Health has therefore been commissioned to ensure that consideration for various vulnerable groups is safeguarded in the event of a new closure, she says.

Bjerke says they also expected an increase in waiting times for mental health care during the corona crisis.

– Fortunately, we see that priority groups such as people with mental disorders and substance abuse problems, do not experience increased waiting time as a result of the pandemic, she says.

– But we must be careful not to create the impression that it is useless to ask for help. It is not true.

She says that many people are having a hard time because of the corona, with social isolation, redundancy and job loss, and that they work to ensure health services for everyone.

In the last seven years, they have put in place far more psychologists in the municipality.

– But there is still a shortage, and we are working on this.

Bjerke adds that sometimes people have to wait for help, so that those who have the greatest need will get it first.

– Out of my control

Over the past 15 years, Tom Hugo has created his own work as a songwriter and artist. Last year, he finally reached a level that was sustainable. Life was good.

– But holding concerts for many people is not compatible with a pandemic. Suddenly everything was out of my control, and I lost faith that I could do it. The appetite disappeared, I struggled to sleep and had mood swings, the 41-year-old explains.

The financial was not the worst. The success of the MGP song, “Spirit In The Sky”, last year ensured a good year in 2019. But the future suddenly felt so uncertain.

Compensation schemes only last a certain amount of time, and many people have to look for other things to do. If you have played the guitar for 20 years, and that is what you are best at, then the burden of having to find another job is great, says Hermansen.