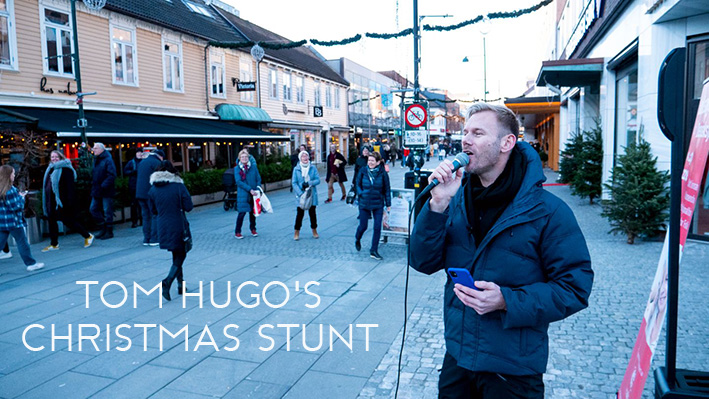 The artist Tom Hugo Hermansen has an extremely busy pre-Christmas period. In a few weeks, he will hold as many as 200 mini Christmas concerts. They can appear anytime and anywhere in the centre of Kristiansand.

KRISTIANSAND: No matter where you may be in Kvadraturen now before Christmas, you can be so lucky to get a so-called “pop-up” concert with the artist Tom Hugo Hermansen.

– The whole concept is that we sing where people are, says Hermansen.

– In Markens, on Torvet, in a shopping centre but also in small flower shops or shoe shops. Today, for example, I held a concert between tangerines and bananas at a grocery store.

Lost gigs due to the pandemic

Together with the artists Pål Rake and Geirmund Hansen, he applied for and received money from Cultiva to hold a total of 200 mini-concerts before Christmas. The foundation has spit in a total of three million extra kroner to please the city’s population and to support artists who have lost many assignments in connection with the pandemic. A total of 25 different projects have received support, all with Christmas as the theme.

– It’s not just me who has lost a lot of jobs due to the corona. Everything has been canceled, so we decided to create our own gigs, says Tom Hugo.

So far, he has held 60 pop-up concerts in the most incredible places. On Friday morning, he appeared in front of the bathers in Aquarama.

– It was a slightly different Christmas mood in front of the whirlpool, Tom Hugo laughs.

– I hadn’t thought that it would be that hot to line up in outdoor clothes.

The “Christmas singers” as they call themselves have made a number of people not knowing when they show up, nor where.

– We mustn’t be anywhere at a specific time, but if people go for a walk in Kvadraturen, there is a great chance of coming across a concert, says Tom Hugo.

People are both surprised and happy and like to sing along when the artist suddenly pops up.

– The other day I showed up in a hair salon where there was a bride who was being made ready. Not only did she think it was fun, but she was actually good at singing. It ended with a duet, “Last Christmas” before she had to run to reach her wedding.

But the artists also have a different purpose with the concerts than to surprise. Because in addition to singing, they raise money for Save the Children and dementia research.

– Yes, if people are happy with the song, I ask them to tip a penny for one of these purposes, says Tom Hugo.

– So I feel a bit like a wandering Christmas pot. It will be fun to see what we have been able to contribute when this is over, it is a win, win, win for us as artists, for the audience who get an experience, and for those we raise money for. So it would have been really fun if we could do this every year.