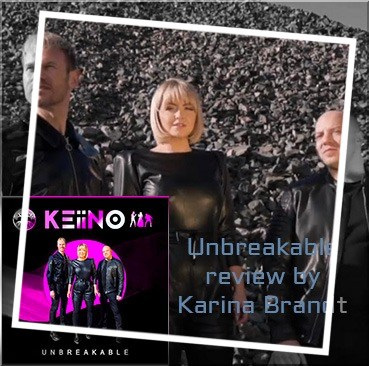 Not surprisingly has KEiiNO given us fans yet another fantastic single release that surpasses the expectations of many of us.

“Unbreakable” is, without comparison, one of the most unique EDM songs on the market, a true gem.

The way KEiiNO and their composing partners have played with the lyrics, the melody and the soundscape this time, really drags us into the cold dark winter woods of a fairytale. The slight touch of echo, as well as Tom’s crispy voice, when he sings the beginning of the second verse, literally makes me feel the ice-cold crystal wind of the winter frost surrounding him. Like always, Tom’s and Alexandra’s voices melt together in perfect harmony when they share the rest of the second verse.

This time we don’t get Sámi language from Fred, but his own unique joik in “Unbreakable” is absolutely beautiful and has its own little melody inside the song. Fred has over the past year grown more confident in joiking and it shines through, clearer than ever, in “Unbreakable”. Let us hear more of that, Fred.

The tempo changes during the song are surprising and challenging and are one of the things that make us pay extra attention early on, as tempo changes like that are un-expected in any song, but which in this case makes “Unbreakable” even stronger.

This song tells the story of a strong and independent woman, who was raised to not put up with violent and repressing behaviour from her male partners, and who is able to stand strong and not break down from what she may experience of negativity.  It also sends the strong message that every woman should be treated with the love and respect of a queen and nobody else but a king of equality is worthy of her love and companionship.

In general a very strong message to women about being aware of how much they are worth and that they shouldn’t let anybody make them feel less than they are, that they are just as much worth as men and everybody else.

“Unbreakable” went straight into the hearts of your fans and a lot of us have been up for hours after midnight, listening to it over and over. With “Unbreakable”, and also their previous release for MGP, “Monument”, KEiiNO has grown into a new and higher level, and personally, I have high expectations of what they will deliver in the future.