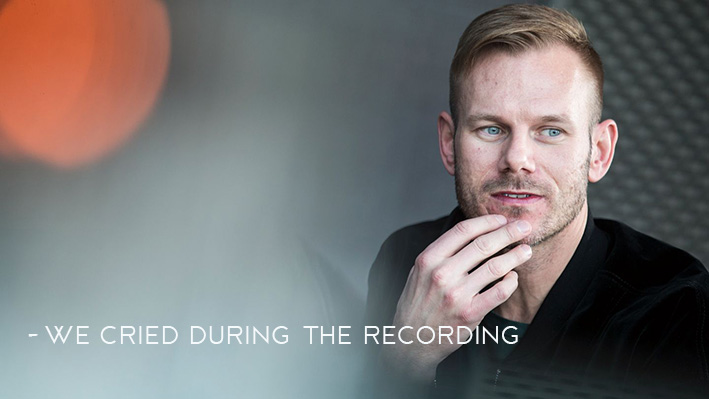 Keiino and Stein Roger Sordal wrote a winter song about longing and loneliness. Half of the income goes to the Mental Health helpline.

KRISTIANSAND: – It was very strong. Alexander cried when he came out with the finished text. There were a few tears when we recorded it as well, says Tom Hugo Hermansen.

This week, the band Keiino releases the single “A Winter’s Night” which is intended as a religion-neutral winter song. The song was written at a songwriting workshop at a cabin in Gjeving last summer, where the band was gathered together with Stein Roger Sordal.

Tom Hugo’s husband Alexander Olsson is a lyricist for Keiino and retired to a private room to write the text.

It’s about missing a person who is no longer there. And it’s about abandoned streets and going to bed alone after waking up at five in the morning.

Tom Hugo Hermansen appeared last week in Fædrelandsvennen and VG and told about the mental bang he went on last spring. The corona closure of the community was triggering, and he also said that he has had three acquaintances who have ended their lives this year due to feelings of hopelessness.

It has gotten worse

– Is the lyrics in the song related to this?

– The text is not inspired by an exact episode. It is about missing someone who is no longer there, either because he or she is no longer here, or because one has been abandoned. These are feelings that easily become extra strong in connection with the time we are now entering. When we wrote it, it was July, and we imagined that it would lighten up for the autumn with the corona. But instead, the exact opposite has happened. Therefore, it will not be any easier for those who feel alone for various reasons now, says Tom Hugo.

He encourages everyone to think about those they have not talked to in a while:

– After these things were in print, I have talked to several people I have not had contact with for a long time. And many people find it difficult that you do not necessarily think about it, he says.

Half of the streaming income from “A Winter’s Night” will go to the Mental Health helpline.

It was after receiving corona support from Kristiansand municipality that Keiino started the songwriting seminar at Gjeving this summer.

Here they invited Stein Roger Sordal to participate and write songs, and the result is four songs.

– I was pleasantly surprised. It’s been 15 years since I first collaborated with Tom Hugo, and we have played a lot together since then. But at the same time, there is a certain distance between what Keiino does musically and my stuff, and I was glad they thought I could have something to contribute to this, says Stein Roger Sordal..

– What they make feels young and fresh, and Alexandra (Rotan) finds it very easy to find immediate melody lines. This song was created when we sat and played with chords, and then Alexander went into a room and disappeared for an hour with the lyrics. The song is about emotions most people can relate to. I even lost my mother a couple of years ago, says Stein Roger Sordal.

A string quartet from Kristiansand Symphony Orchestra has a central role in the song’s soundscape, while the cover is made by Arne Vilhelm Tellefsen.

– This is as close to an all-southern project as it is possible to get, says Tom Hugo Hermansen.

2 thoughts on “We cried during the recording”