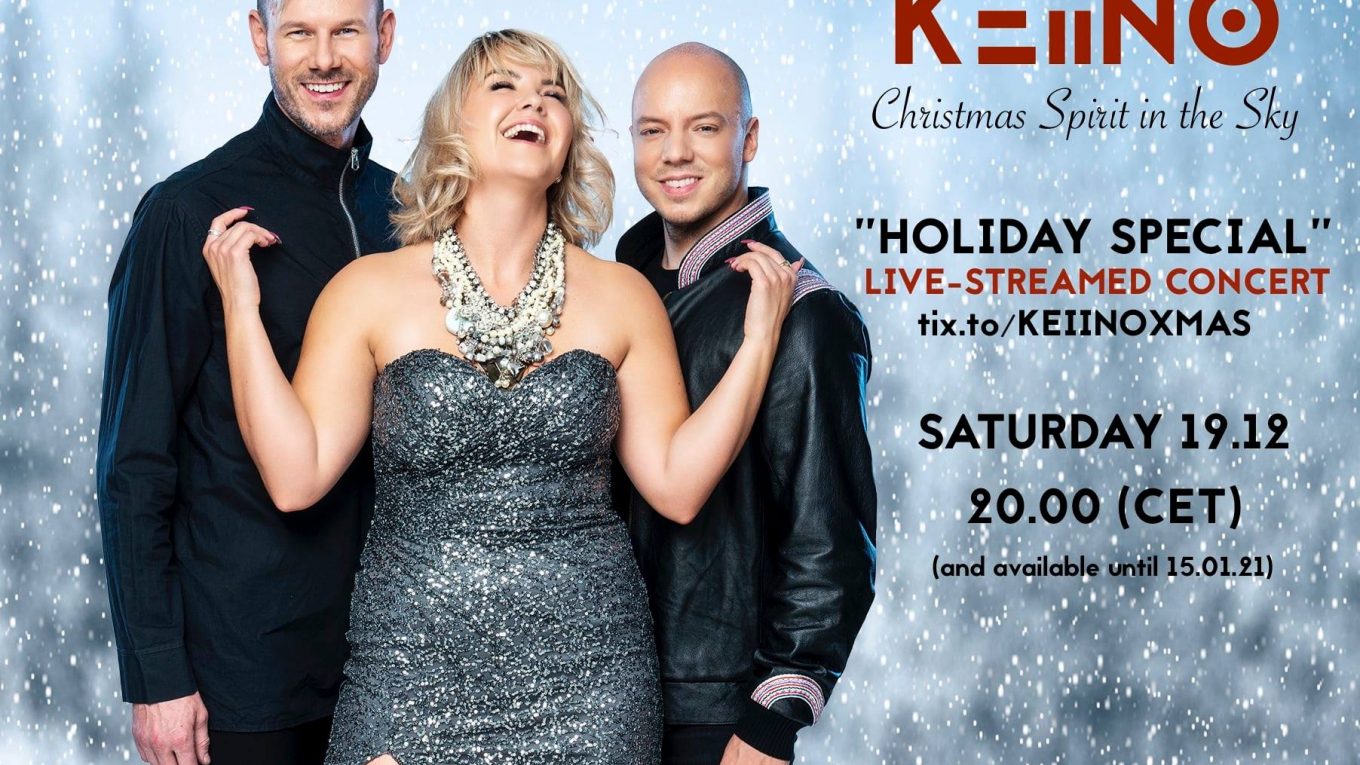 December 19th, 2020 arrived, and a lot of fans from around the world sat waiting in anticipation of the streamed concert of Christmas Spirit in the Sky. Most of us had bought tickets since they came on sale, others had won tickets in various competitions.

A lot of us met up in the chat up to an hour before the concert started, just to chat and get to know each other, and for my part – as well as André and Diana’s part – also to tell people about the existence of our amazing FANGROUP on Facebook, which is free to join and we accept minors if their parents allow them to be members. We are monitoring language and presentation in the group so it is safe for all ages.

We were presented some of KEiiNO’s own songs, in new variations, some more up-tempo, others slower than we know them. Personally, I loved to hear these different versions. It’s amazing how different a song can be interpreted, carried out at a different speed.

Well known Christmas songs had been KEiiNOed (the new expression for the dictionary of 2020), into even more beautiful versions than we already knew them. Fred’s joik in “Walking in the air” followed by Alexandra’s angelic voice, gave us the shivers and I’m sure I was not the only one to shed a tear here. Tom singing Leonhard Cohen’s, “Hallelujah” was so heartfelt and emotional that the shivers and tears here, were not any less than what Fred and Alexandra presented. Wow. They really ought to release a Christmas album next year, containing these beautiful songs!

“Last Christmas”, is one we all probably know, since it has been around for so many years that it’s a must to have on every Christmas playlist. Personally, I had been tired of this song for plenty of years, since all shops and radio stations would play it every five minutes for at least 20 years, no matter which way you turned. But hearing KEiiNO’s version already last year, when they performed it, sitting in an auto camper, dressed up for Christmas at the charity show for the Norwegian Salvation Army, I have found a new love for this song. Tonight it was even better with more instruments playing along. Thank you, KEiiNO, for rebooting my love for “Last Christmas”.

“Jul i Svingen” is a lovely and Christmassy song from a Scandinavian series, here known as “julekalender”, a Christmas TV series of 24 episodes, for children, one episode every day. The series was franchised and sold at least to Denmark, so perhaps some of you knew this song in your own language, depending on where in the world you live. Until tonight I only knew the Danish version, but of course, Alexandra raised it to another level in Norwegian, amazing singer like she is 🙂

A Winter Wonderland, performed by Tom and Alexandra, was perfectly harmonized, and lovely to sing along to. Probably the best version of the song I have heard yet.

“Silent Night” in three languages… does it get any more beautiful? No, it doesn’t. Alexandra sang in English, the next verse was Fred in Sámi, and Tom sang the Norwegian verse, with Fred and Alexandra as a choir. It was so beautiful.

Now, there were several more songs in this show, BUT, because the show is still available, and access can be purchased until January 15th, 2021, I won’t tell anymore, because I think you should do whatever may be in your power, to get hold of a ticket and see the show for yourself. Once you have access, you can watch it over and over, until January 15th.

And don’t forget to check out all the screenshots of the show – and screenshots from other performances, in the gallery.