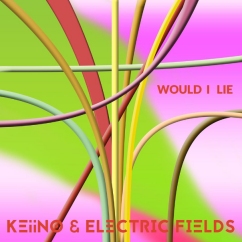 3rd of April KEiiNO released their brand new single, “Would I lie”, in collaboration with South Australian Indigenous duo, Electric Fields, which is based in Adelaide.

During KEiiNO’s tour in Australia in the fall, they spent 4 hours in a studio with Zaachariaha Fielding and Michael Ross, the two members in Electric Fields, to record this amazing song together.

While some of this song was recorded in Australia, other parts have been recorded in Audioland Music in Alta and Triplet studios A/S, Oslo, Norway.

“Would I lie” is a great uptempo song, beautiful lyrics (you can find those elsewhere on this site), about what Mother Earth, who is – as we all know – suffering hard from past times pollution, cutting down of rainforests, toxic air pollution, plastic in the seas, you name it, needs from us humans in order to be safe and survive for the future.

“Would I lie” doesn’t give us the answer to the above question, but urges Mother Earth to shout out, give us a call, and let us know what we can do to help.