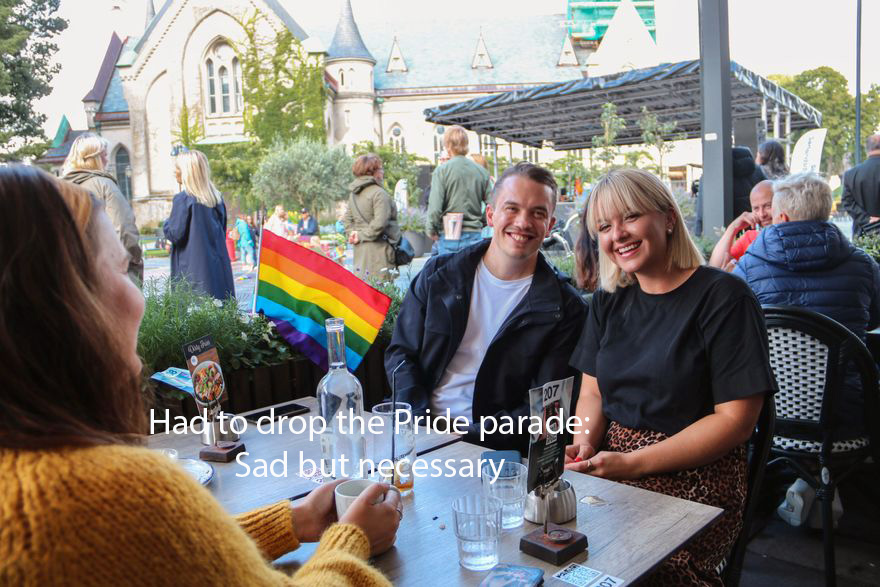 Skeive Sørlandsdager had to drop the Pride parade to avoid the spread of infection. As a replacement, there was a rainbow party with Tom Hugo on Torvet.

KRISTIANSAND: – It’s sad, but we had no choice, says festival director Roy Hægeland to Fædrelandsvennen.

– How important is the parade?

– It is very important. For many, the parade has been the first opportunity to be able to be themselves 100 per cent, says Hægeland.

The 33-year-old from Vennesla took over as leader of Skeive Sørlandsdager before this year’s event. He has previously been deputy chairman.

The Pride parade through the city has been the festival’s highlight for many. In 2019, over 1100 people participated. This year there was a concert with Radio Jam, Voi Voi and Keiino on Torvet.

– I’m very happy that Tom Hugo is lining up. He is a good artist and also belongs to the queer environment, says Hægeland.

The festival kept in close contact with the restaurants on Torvet to ensure good infection control.

– We also have our own people who will make sure that people keep some distance, says Hægeland.

When Fædrelandsvennen met him at 4 pm, the restaurants were filled with people and rainbow flags. The changing weather apparently did not dampen the mood.

– It is absolutely incredible that we get the whole nightlife in Kristiansand at a party like this, says Anne Charlotte Larsen, former leader of FRI Agder.

FRI Agder (the Association for Gender and Sexuality Diversity) organizes Skeive Sørlandsdager. Newly elected county leader Thea Litschi also thinks it was a pity that the parade had to be cancelled.

– It’s sad but necessary. The parade has been important in attracting people, but I think we have received a very good replacement. Those who have achieved this have done a great job, says Litschi.

The 26-year-old is originally from Moss, but has lived in Kristiansand for seven years. On a daily basis, she works as a teacher at Kvadraturen upper secondary school.

– Living conditions surveys show blood-red numbers for mental health among gays in Sørlandet. It is therefore important to continue working for diversity and equality, says Litschi.

At Jonas B.’s outdoor restaurant, Fædrelandsvennen met Hildegunn Sordal, Alexander Olsson and Alexandra Rotan (from Keiino) at one of the tables.

– I think the Pride parade is especially important in Kristiansand. The march of the right-wing extremists two years ago showed that they experienced support from the population. It is therefore important to point out that there are many who stand for something completely different. I think there are many more who support Pride than right-wing extremists, says Olsson, who is married to Tom Hugo.