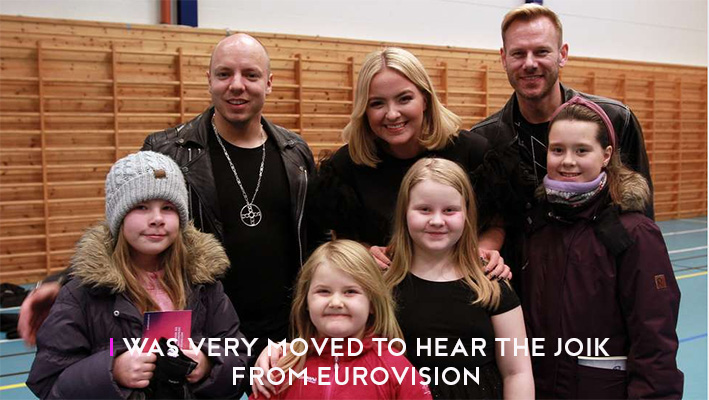 The heroes from KEiiNO came to Kautokeino

KEiiNO has recently toured the world and latest they have charmed Australia and audience in New York. the period after participating in Eurovision has been busy. For the very first time the group visited Fred René’s home village, Kautokeino last Friday and the band had a great time with the kids and youths on Báktehárji even though the circumstances were a little smaller than what they are used to.

A lot of kids and youths have been waiting for KEiiNO to come to Fred René’s home village, and when it finally happened, some received a little more attention when they met the band and talked a little with them backstage, after the concerts. Astrid Marie Almgren Helmen (11) Mia Andre Pulk (13) and sisters Nickolina and Cassandra Nilsson Lundgren was radiating like little suns when they came in close touch with the band.

— yes, they were sooo nice, the girls exclaimed. They are our heroes, so it was really funny to meet them, Nickolina says, while the smile spreads all over her face.

The band took the lead with their new song, “Prayin” – and from first second the audience was with them on the notes and allsong and joik. The volume impressed the band.

— oh yes, almighty. Here were higher volume than at the biggest concerts with more than 30.000 in front of the stage, Tom Hugo Hermansen smiles, after the concert.

— and everybody knew the lyrics and the joiks. I was very impressed, Alexandra Rotan adds.

A little special did it become for third man in the band, when the joik met him from the scene.

— I was very moved. Seeing the kindergarten kids in front, the other kids and hear the joik made my knees shiver a little and I had a bit of trouble joiking from the scene in the beginning, Fred René Buljo tells about the reception on home turf and continues:

— We have for a long while wanted to give something back to the people up North, and especially my home village, so this is our thanks for the support, from the amazing days in Israel and the time after. I am happy we finally came to this and the reception we had really warned my heart, Fredda smiles.

The band went on to Alta to finish some music and a video and then a new album is on the way.

— Yes, we are playing in Alta, and we are going in around Fredda’s dad’s studio (Klemet Anders Buljo) where it all started, and finish some work and a music video, and then we are also soon done with the birth of our album. It’s going to be funny, Tom Hugo smiles.

They liked it very much in Kautokeino and promise it won’t be the last visit.

— We have been so excited about this place which Fredda has talked so much about, and everything lived up to expectations. Great audience, beautiful arctic landscape, we have heard a lot about the cold, even though it was mild today, according to Fredda, Alexandra laughs.

— So it will be a reunion with you up here?

— Yes, we are certainly coming back, but we can’t say when Tom Hugo says concluding.

All the schools and kindergartens were present at the concert in Báktehárji, also Maze school with leader Anton Dahl in the front, met with a big group of students, who were photographed along with the band.