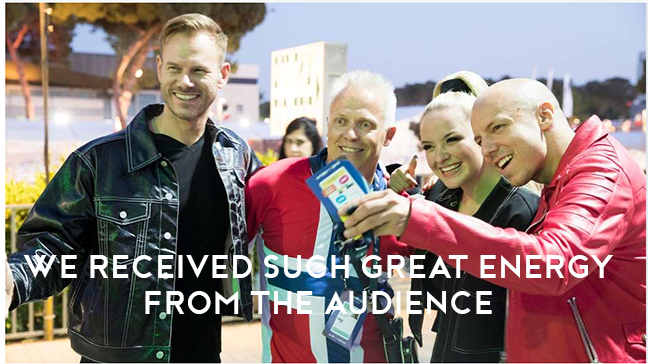 Norway has crawled up to a fifth-place on the odds lists after KEiiNO’s performance in the Eurovision-finale. — We were met by a cheering audience, Alexandra Rotan says.

— What an experience!  We were met by a cheering crowd that shouted “NORWAY, NORWAY”, and it was so amazing. We had such great energy from the audience, KEiiNO’s Alexandra Rotan says, through NRK’s press contacts.

Norway has climbed the combined odds-directory on Eurovisionworld. From Thursday evening we have crawled up ten places from the 15th place.

Norway was met with massive, rhythmic claiing in the filled press center – and many joiked along.

Right after 23 (11pm) Norwegian time, all countries had been on stage, and the voting could begin.

The Netherlands was favourite

Until now it’s probably Sweden that has created most life. The country is represented by John Lundvik with the song “Too late for love”.

The Netherlands are still the biggest favourite of the 26 participating countries in the finale in Tel Aviv, and Duncan Laurence harvested a lot of applause for “Arcade”. Also Russian Sergej Lazarev’s “Scream” stroke well, in addition to the homebound hope, Kobi Marimi, with “Home”, naturally.

The North is well represented in the top – with Sweden in fifth- and Iceland on sixth-place, according to the odds-directory.