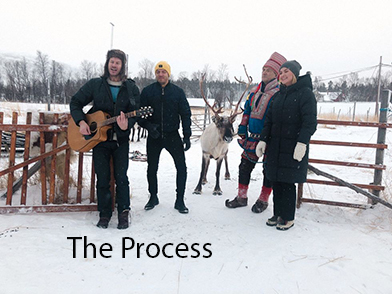 Just days before the deadline, the magic that sent Tom Hugo Hermansen to Eurovision arose

The melody line fell into his head one summer day in 2015. For the next three years, producer and songwriter Tom Hugo Hermansen pondered how it could be used.

After two attempts in 2013 and 2018, Tom Hugo Hermansen is ready to represent Norway in the Eurovision Song Contest together with Fred Buljo and Alexandra Rotan in KEiiNO.

Little did he know that he would be on stage in Tel Aviv in front of 200 million TV viewers when the first melody line of “Spirit in the sky” fell into his head three years ago.

– Together with a German producer friend, I was on Borøya outside Søgne. The song we were working on never became anything, but I never managed to let go of that intro. I knew there was something with the melody line, I was just waiting to find something to use it for, says Hermansen.

Melody lines often come like lightning from clear skies, whether he is standing in the shower or strolling around the streets of Berlin.

– Everything I make is a product of music I have listened to since I was a child. The melodic has always been closest to my heart, and much originates from the old lullaby tradition, he says.

In May 2018, he and his husband Alex Olsson travelled to the Eurovision final in Lisbon. This is where the idea of ​​writing a new song was born, this time for this year’s Melodi Grand Prix.

– We had a topic that we wanted to address, about the acceptance of being different from the majority. This is something that unfortunately is still just as relevant, not least in Eastern Europe, says Hermansen.

In June, the melody line from Borøya was brought back. A song sketch with intro, verse and chorus – as well as an open part that remained to be filled – was ready. At the same time, he began to play with the idea of ​​mixing yoik with pop music.

Residing in Berlin and Kristiansand

Education: Holds a bachelor’s degree in communication, has also studied English, media studies and has some subjects from BI.

Works as a musician and songwriter. Has participated in the Melodi Grand Prix three times. In parallel with his solo career, he has written songs for successful artists in Japan, Germany and China.

Is the main man behind this year’s Norwegian contribution to the Eurovision Song Contest with the song “Spirit in the sky” under the direction of KEiiNO.

Many are fighting the same battle

– We gays belong to a minority who have had to fight for the rights we have today. At the same time, there are many ethnic minorities who not too long ago were completely overlooked. Therefore, I felt it was natural to involve a Sami songwriter in the project, says Hermansen.

Thus, the ball started to roll. Eventually, he got in touch with the Sami musician, rapper and joiker Fred Buljo.

– In the beginning, we did several versions of Sami rap, until NRK thought we should cut the rap. Just days before the song had to be sent in December last year, the joik was put on, he says.

December Day Fred Buljo went into the studio and joiked for the first time live, described as a magical experience.

– I remember we got a feeling that this was going to work. In the beginning, it was traditional joik, as it was joiked many hundreds of years ago. Eventually, it slides into more singing, and that is how the joik has also developed, says Hermansen.

“Spirit in the sky” is produced in Oslo, Helsinki, Berlin, Alta and in the South. The list of authors includes seven names.

– This song has really become a joint project. At the same time, there is a series of things that could have gone wrong. No one knew how the three of us would work together. In fact, we first met in the studio just a week before the finished song was to be delivered to NRK. It was completely marginal, says Hermansen.