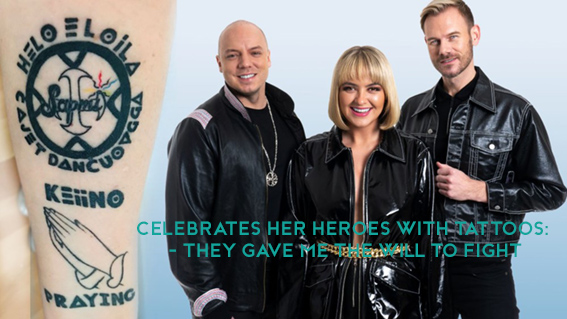 May 18th 2019: In Denmark, Karina Brandt lies worn out and sick in front of the TV. Then KEiiNO enters the stage in Tel Aviv. This evening her life changes.

— Have you heard? KEiiNO is going to be in MGP, says a cheerful Karina Brandt when we called her the same day as KEiiNO was announced as MGP-participants in 2021. (MGP is the national selection of Eurovision/Red.)

We have barely said hello before the question is asked. Of course, she had just received the news.

Karina is what we can call a superfan of KEiiNO. She is an administrator and writer on the fansites to the group, she has designed KEiiNO-tattoos, and she has even made KEiiNO-dolls. You can sure say that this lady has dedicated a lot of time to the band she feels has saved her life.

Tattoos with a meaning

Brandt thanks KEiiNO that she now is fresh and feels better. This she shows with creativity, and it all started with a tattoo inspired by their song, “Praying”.

— Praying is a daily part of my life. “Praying” touched something inside me and I sat listening to it all night, she says.

The other tattoo she has spent significantly more time on. There is a lot of symbolism in it, like for example the four corners and the points in the cross.

— It could be the four seasons or the four corners of the world. And then there is the Sámi hat (čiehgahpir/The four winds hat/Red.) and the four colours in the Sámi flag, she tells.

Karina Brandt has made herself noticed earlier. She is a dollmaker and has made dolls that look like the members of KEiiNO as children.

Found new strength in the joik

In the spring of 2019, Karina was very ill. She fought a metabolic disease and was in the hospital. The future looked dark.

— I was close to dying. I was very, very ill and had no more strength to fight back with, Karina tells.

While she was in the hospital, it was time for the final of Eurovision Song Contest. Karina was too worn out to watch, but her daughters really wanted to watch the final with their mom. When KEiiNO entered the stage, something happened to her. And when Fred started joining, it said pang!

— Suddenly I sat up in the bed and thought; What the f…. happened? Karina tells.

During the next weeks, she became stronger got to go home. After a while and she functioned better, and she spent more of her time on KEiiNO.

Woke up feelings from childhood

Karina Brandt is a creative soul from Sonderborg in Denmark, with a heart for the Sámi. An interest she has had since childhood. Her dad’s dad was from the Alta-area in Finnmark and she grew up in a home with items handed down through generations. And the stories, of course.

— My dad told me Sámi stories which I thought were fairytales, but which I later found out was Sámi traditional stories.

Karina thinks that Fred Buljo’s joik may have woken up the feelings from back when her granddad told stories and it rewoke her strength to fight her way out of the illness.

Impressed and grateful for Karina

Both Alexandra, Fred and Tom Hugo know their superfan, Karina. They saw her tattoos on Instagram.

— It is fantastic that KEiiNO can have such an influence on people’s lives, Alexandra says.

They say that Karina and the other dedicated VolKEiiNOs (this is what the KEiiNO-fans call themselves/red.anm.) helps motivating them to continue working with the music.

They also want to send a personal greeting to Karina through NRK:

— We are so incredibly happy for the job she does on the fansite. She translates, is dedicated, sends messages to the band and cheers us on. Thank you so much, Karina!

Participating in MGP and Eurovision Song Contest two years ago was big for KEiiNO. Since then they have thought that if they make a song they have faith in, then they will try again.

They got that feeling with the song, “Monument” and it went better than expected. The song was chosen as one of the six pre-qualified contributions for the final on February 20th.

— We were so positively surprised over qualifying straight for the final, Alexandra Rotan says.

In Denmark Karina Brandt is happy. She has faith in KEiiNO winning in Norway and participate in Eurovision again.

— I think so. Both because they have their popularity and because their song is very Melodi Grand Prix-ish, she says.

Will there be more KEiiNO-tattoos, now they are participating in MGP again?

— I think my project isn’t finished until I have all three’s autographs tattooed on my arm, she concludes.