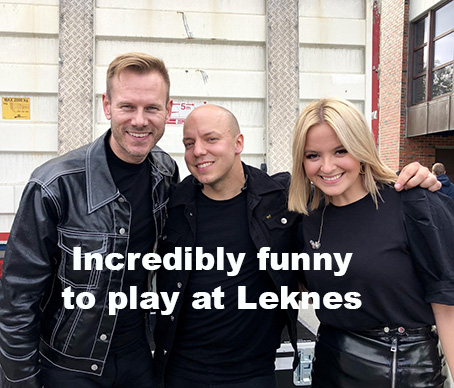 The concert with Melodi Grand Prix winner KEiiNO was one of the highlights at Leknes during today’s Arctic Race stage. They themselves were very happy after the performance, and emphasize that they are happy to return.

After a huge show, with only a short break to see the cyclists pass Leknes centre, KEiiNO comes sprinting down from the small stage that was set up outside the town hall. The next item on the program is to meet big and small fans of the MGP winners at the Lofoten Center to take photos and sign autographs.

-It was incredibly fun to play here at Leknes, says Alexandra Rotan, KEiiNO’s female vocalist, who can also tell that it is her first time in Lofoten, but definitely not the last.

– Suddenly the sun peeked out, and there was a good atmosphere with a very large audience, says Fred Buljo, who thinks it was very fun with such a mixed audience with people of all ages.

– You could say it was good enough pressure for the power to go in the middle of the show at least, Tom Hugo Hermansen says and laughs.

In the middle of the concert, the power went out, but the problem was solved quickly, and that stopped neither KEiiNO nor the pull.

– We are very happy to come back several times, says a unanimous KEiiNO.

The rest of the day and tomorrow will be spent enjoying Lofoten.

Now hiking and fishing are on the program.

– I actually caught my very first fish ever here in Lofoten. I was around 2-3 years old and fished with a Mickey Mouse fishing rod from a pier here somewhere. It was very small, so we had to release it again, says the Finnboy of the group.

– My goal now is to catch it again, now it has probably become very difficult, says Buljo and laughs.