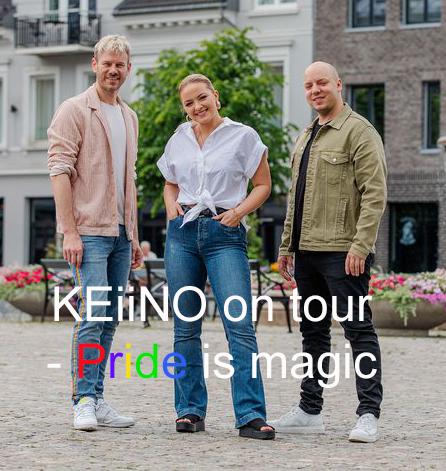 — We are involved in opening up Norway, and hope that people will soon be able to dance closely, says Keiino, who will perform in Kristiansand on Friday.

KRISTIANSAND: – It’s so good to be up and running, and it’s nice to be in Kristiansand during the Pride month, says Tom Hugo.

– Now we are on the road, a 16-day tour in Eastern Norway and Western Norway – and we play Friday night at the Theater in Kristiansand, says Fred Buljo, and is pleased that the band released a new single on Friday.

June is the month where cities all over the world host Pride, and the focus is on the fight for equal rights regardless of orientation and gender expression. But in all months of the year, minorities fight against those who use their majority power, and history shows that it pays to take the fight, writes the management of Keiino in a press release on Friday.

The song became available on Friday, and brings with it a story from Buljo.

During the development of the Alta watercourse, many Sami got to feel on their bodies how society at large can cope, and several in Fred Buljo’s family were affected:

– “Áddjá” means grandfather in Sami, but should also symbolize the inner voice that gives you advice and courage to be who you are, never give up, but fight for what you believe in. Fortunately, all the original plans to dam the Alta watercourse were not carried out due to a huge stand on the will of those who fought against the superior forces, he says.

The band members in Keiino are looking forward to touring in difficult times.

Battle of the Stars

– It feels unrealistic to play for people during the pandemic. People are hungry at concerts and give a lot of themselves when they are there. So I feel like it’s a magical time to be on tour. Now we will complete the tour, we will play at many festivals and then Alexandra will participate in Battle of the Stars. I think she will win, says Buljo.

This autumn, the band members will follow Alexandra at Stjernekamp.

– I look forward to it so much. Everything is so super professional. In MGP you get the opportunity to present a number under such professional conditions, and now I will be allowed to do this in so many genres. It will be a challenge, but it will be very, very fun, she says and makes no secret of the fact that it will be strange to stand alone.

– I felt that I missed them at the press conference, but they have promised that they will cheer on me.

– What will be your strength in Battle of the Stars?

– It takes a lot for me to get scared. But there can be many things I have no control over, such as opera. At the same time, I look forward to it, because when I challenge myself, I only get better. And then I dread doing so much new, with so many TV viewers.

– But one thing I know: I will give the Norwegian people entertainment.