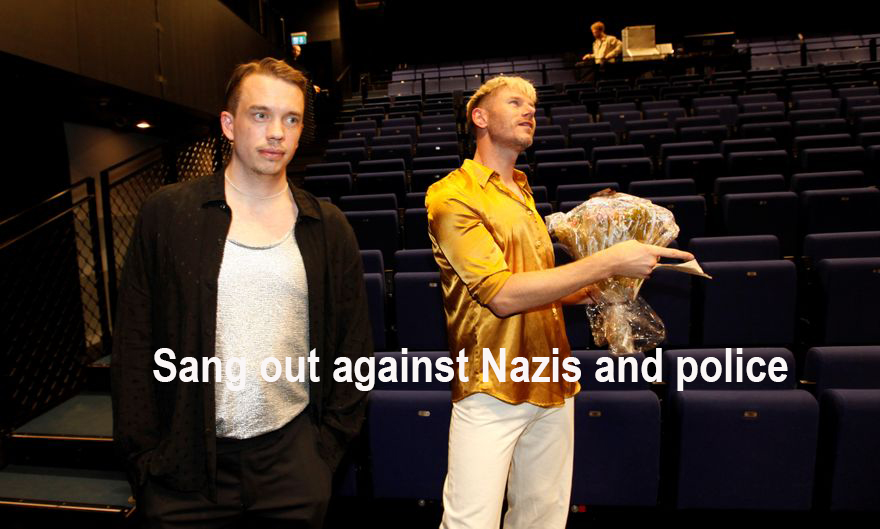 Tom Hugo Hermansen sang nine queer songs in Kilden. One of them was about being so angry that you can’t sleep.

KRISTIANSAND: – I was at work at Hennes & Mauritz that day. Then I saw the door that the Nazis went through Markens with banners and all. I felt I was so incredibly pissed off. I felt it as an attack on me personally, says Alexander Olsson.

He is the lyricist of the nine melodies his husband and co-composer Tom Hugo Hermansen performed in Kilden on Tuesday. The concert “Ut av skallet” was set up in connection with Skeive sørlandsdager, and is made with Cultiva support. The repertoire was exclusively newly written material with a skewed starting point.

The hall is filled with around 200 people. For the occasion, the Rainbow Band had been set up, and it was a slightly different artist than “MGP-Tom Hugo” the audience got to see and hear this evening. With guitar/bass/drums/keyboard as accompaniment, came a series of personal and meaningful lyrics about being queer.

Some were pop, some were rock, some were country and some were funk. And on a couple of the songs, Keiino colleague Alexandra Rotan came to contribute with vocals.

Half were in English, and the rest in southern Norwegian. And almost everything was inspired by reality, either as the two composers have experienced it, or as people have told about it.

And a song that got the most intense commitment from the vocalist was “Fade out“. The song is Tom Hugo and Alexander’s showdown with the Nazis, but also with the police who let them march unharmed through Marken under the banner “Crush the homolobby”:

“Tell me: Who needs police
That let nazis walk our streets.
I’m so angry I can’t sleep
I’m so angry
But I fade out.”

– I was furious. They want to end us with hatred and violence. Now I’ll probably get them on my neck, but I already have them, said lyricist Olsson.

Also in the concert was “Proud” which is this year’s pride song as composed by Hermansen / Olsson.

– When we had recorded it in Cederberg studio, I realized that we had probably made the most rocking pride song ever, Tom Hugo said from the stage before the band started with “Proud”. The audience sang for a large part because the song has already become so known.

There was also room for songs about gender and sexuality in the working class, about a lesbian robber and about queer nightclubs.

The emotional high point probably still came for most people in the end.

– The reason I started this project was a meeting I had three or four years ago. This song is a story about risking everything for love in adulthood, said Tom Hugo.

Too early to get in the newspaper

The two men the song was about were present in the hall as guests of honour, and it was easy to see that “Eden” grabbed both them and most of the others present.

“I sang carefully when the sky was black
I prayed for salvation every single night
God, can one die of longing?
When everything is as before.”

After standing ovations, the two that the song was about, came around to thank the composers. To be portrayed in Fædrelandsvennen was still too early for them.

They have come out of the closet relatively recently after living in heterosexual relationships for decades before this.

– I’m very glad they liked the song. It would have been a shame if not, said a relieved Alexander Olsson.

– It was very nice to see that the songs were so well received, and especially because it is brand new music. We think these songs will be used more later, and that people who hear them can recognize themselves. The next thing we will do is perform them in Oslo on my birthday, said Hermansen.

The concert will also be available digitally in its entirety next week.