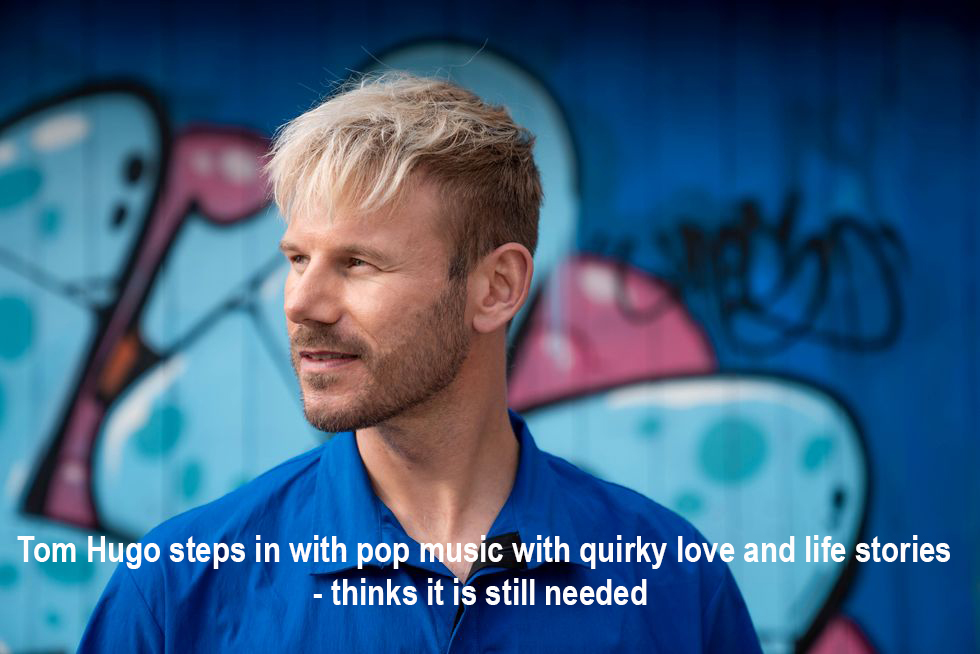 Many lyrics are still about love between straight men and women. Tom Hugo wants to do something about it.

Now the KEiiNO frontman has written nine queer songs together with his husband Alex Olsson, who is also involved in writing the lyrics to Keiino’s songs.

– We hope that these new songs can be a contribution to the further normalization of diversity. It isn’t that many years ago that queer love stories and life stories were virtually absent from pop music. Fortunately, this is changing, and several openly queer artists are releasing music and topping the charts today both nationally and worldwide, says Tom Hugo, who also says it will be good for his own part:

– It will be good to be able to work with a solo album where I don’t have to write cryptically or without a defined pronoun.

Tom Hugo got the idea for the “Ut av skallet” project when he heard the story of a couple who both came from conservative, Christian backgrounds, but who in mature adulthood found each other and chose to be open about their love.

Alex Olsson says about the lyrics he is behind that they are a mixture of personal stories, stories told to the couple by friends and acquaintances, and songs inspired by history and culture.

– These stories have inspired songs that are full of love, anger, joy and sorrow in their own way. They describe both the “ordinary” and the “different” with being queer, he says to NTB.

– But also the queer environment is diverse?

– We have been aware that LGBTIQ + is diverse, and that it may not be all stories that are ours to tell. We have therefore focused on stories that we can tell with integrity from our point of view in the queer environment, and with the background and the experiences we ourselves have. But we also have some songs inspired by stories others have told us.

Bowie was the hero

Alex Olsson has always been drawn to artists and lyrics that broke with the norms of society, and which were often seen as alternative and queer.

– David Bowie was the greatest hero, and especially his dark and absurd lyrics like “Five Years”. Tori Amos, the queen of the dark and the absurd, was another favourite. When it comes to queer lyrics, I remember The Ark’s “Father Of a Son”, which was about gay adoption. It made a huge impression on me when it arrived almost 20 years ago. Of the more current queer artists, Brandi Carlile’s country pop is a favourite, and her songs have been a great inspiration for this project, says Alex Olsson.

He has written a master’s thesis on “internalized heterosexism” in queers, a struggle Tom Hugo has previously said that he recognizes himself in.

– Lack of queer role models when I was a teenager made it difficult for me to accept how I was screwed together. In my teens, I spent a lot of energy overriding the queer part of myself, since I did not think it was possible to be a commercial pop artist without being “available” to those who listen to pop the most: girls.

It was not until Tom Hugo, who has always been most interested in melodies, became familiar with himself that he could write completely honest lyrics.

– I also received bad advice from an industry veteran who encouraged me to keep my orientation hidden before I released my first album nine years ago. So for me, it will be good to be able to work with a solo album where I do not have to write cryptically or without a defined pronoun, he declares.

The “Ut av skallet” songs continue the journey that Tom Hugo began with KEiiNO. The group’s Alexandra Rotan is also a guest on one of the songs.

– The lyrics and songs that we write in Keiino are based on the lives and values ​​of all of us in the group. KEiiNO was created with a goal of being able to represent “the entire” Norway in Eurovision, and highlight Sami music and LGBTIQ + which has not always been prominent in pop music, so you can definitely say that we have thought in these terms when it comes to lyrics. And the music in KEiiNO, says Tom Hugo.

His new solo songs are premiered in the concert “Ut av skallet”, which premieres in Kristiansand on August 24 during Skeive Sørlandsdager – in the region that according to Tom Hugo often comes out worst when it comes to queer living conditions and on surveys of attitudes in the population to queer:

– It is important that such a concert is set up there, but since we want to show the songs to as many people as possible, we also play the concert in Oslo the next day.

With him is the singer Regnbuebandet, a bunch of musician friends who he says share the couple’s values: Pianist and “Beat for Beat” conductor Julie Falkevik, guitarists Markus Bastøe and Tommy Jacksonville, bassist Bjarne Severinsen and Kjell Åge Stoveland on bass.

There will also be a record recording soon, although it was not really the intention:

– We are so pleased with the result that we have booked studio time in early September, and hope to be able to drop in October already, he says:

– I have to take the chance now that Alexandra’s participation in “Stjernekamp” means that we have a small concert break with KEiiNO until November.