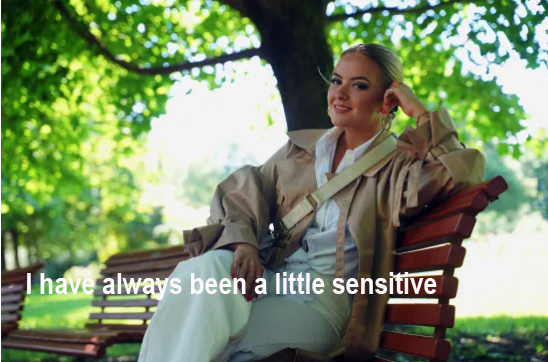 “Stjernekamp” current Alexandra Rotan thinks she is ill-equipped to withstand criticism – especially from those who know music.

Alexandra Rotan strolls into Frognerparken while she radiates in competition with the sun.

– I have good reason to walk around and be gentle, she says.

The artist from Råholt brushes over a bench before she sits down. Her nails are long and neon pink, the earrings are large and the outfit is light and summery. Alexandra’s summer has consisted of gigs with the band KEiiNO and songwriting in Sørlandet.

– I spend my whole life on this. There is no life outside of music! I love to only plan one week of life at a time and stay in a suitcase. That is the musician life I want to live, she explains.

That’s exactly what makes Alexandra in such a good mood.

The singer is usually heard with her two band colleagues Fred Buljo and Tom Hugo Hermansen, but this autumn she is alone on stage – the “Stjernekamp” stage.

She has been asked to take part in “Stjernekamp” for the past four years but declined because she didn’t feel she had enough artist career behind her.

This time, however, the answer was yes.

– It feels absolutely fantastic to be a part of “Stjernekamp”. The worst thing I know is to say no, so I was so happy when I was asked again because then they hadn’t lost faith in me, says the MGP queen.

Alexandra is an energetic yes-person with a lot on – and in – her heart.

She loves to entertain and thinks she is created to be on the “Stjernekamp” stage. When P3.no meets her ahead of the first broadcast, there is still one thing she dreads: the feedback from the judges.

– I have always been a bit sensitive and take things quite a lot heavier than it really is, so I need to be better at accepting constructive criticism, says Alexandra and sighs.

The 25-year-old explains that she can go completely down a black pit and be quite upset if she gets criticism from someone who knows music, and such things can quickly linger and gnaw and make her doubt herself.

– I’m very sensitive. I’m high and low all the time. I am super happy and super energetic, but can very quickly get bored of such little things.

Although Alexandra likes to go through many emotions in a short time, it is the joy she most often feels. The artist believes her best trait is that she is naturally gentle.

The happy-lady’s emotional life is involved in all areas of life.

– I go in with all my heart in everything I do.

She does this in both music and romance. But first a little about the music:

Alexandra has been with Keiino since 2018, which has been a full-time job. After the music group won the Melodi Grand Prix (MGP) in 2019, she could really start making a living by playing music.

She believes she has managed to establish an artist career for two reasons: She loves music, and despite her strong feelings, she dares to get a “no”.

– My thing is to be really forward. I got it from dad, she laughs.

The 25-year-old is happy to call around to ask for cooperation or to ask for advice. She believes this has helped to develop her as an artist.

– My vocals are probably the ones that have changed the most in those years… Ehm, and my stage personality. The joy of music just grows and grows, and I never get bored, says Alexandra excitedly and never emphasizes.

The artist explains that she has now found her “pop sound”. As a 14-year-old, she looked up to Céline Dion and Whitney Houston, which inspired her to use the depth of her voice. But now it is the bright tones that apply.

– All the Keiino songs are in a strenuous register for me. Tom Hugo has found that I sound best in the light tones. That means I have to sing in a register that is terribly strenuous. It takes hard work to get there, but it’s fun.

The second area of ​​life Alexandra enters wholeheartedly is romantic relationships. Although the artist is single at the moment, love life is not a boring chapter.

– I’m a very flirtatious person. I think it’s really fun to meet new people and flirt and such, but as soon as it gets a little serious, I panic.

Alexandra’s flirtatious personality is also the reason why her manager banned her from dating when KEiiNO joined MGP this spring.

She thinks that was just fine because she easily loses focus when she’s flirting.

– When I meet a person, I go in with my heart from day one. It’s so scary. It’s really a negative thing. It makes them get to know me very quickly, but it also makes me hurt. So now I want to spare myself a little from it, even though it would probably have been some insanely good songs out of it.

Alexandra says she wants a boyfriend in the long run, but that she right now wants to focus on music and travel.

The focus Alexandra believes she must have. That is because:

Alexandra straightens her back and looks both engaged and resigned.

– Sometimes it’s really tiring, and other times it’s an advantage to bring out cool details in the voice or make a performance be the best possible. But it is tiring to be a little dissatisfied often, Alexandra hesitates.

For a perfectionist, flaws during performances are not the most fun, but after hundreds of concerts that have gone very well, there are also some moments that have been the “longest minutes in life”, as she says herself.

As a 17-year-old, she was to perform a French song in a packed culture house. Alexandra went up on stage, put down the music stand and lined up.

– Then I see that I do not see the notes!

She froze and therefore did not get closer to the stand.

– And I did not know a split word of that song. So I babbled French…

Alexandra sighs and laughs at herself.

– I got some glances from those in the hall who knew French. It’s the worst thing I’ve ever done in my whole life! It’s cruel, I do not understand that it happened.

Another time she was touring with Keiino in Australia. During one of the concerts, the high split on her tight skirt had turned to the crotch.

– Then I just said: “You see everything, but do not say anything?”

Alexandra is very ready to be on stage again. Her biggest dream is to be able to hold concerts every single day throughout the year, but in the first instance, it is every Saturday in “Stjernekamp” that applies.

– It sounds completely wild, but I notice it as soon as I have a break. It’s boring!

Alexandra started rehearsing the songs she will be performing a long time ago. Lately, there has been only one thing that matters: To prepare to deal with the judges’ feedback.

– I just have to remember that I am not bad and that it is not a personal attack, Alexandra smiles and adds: