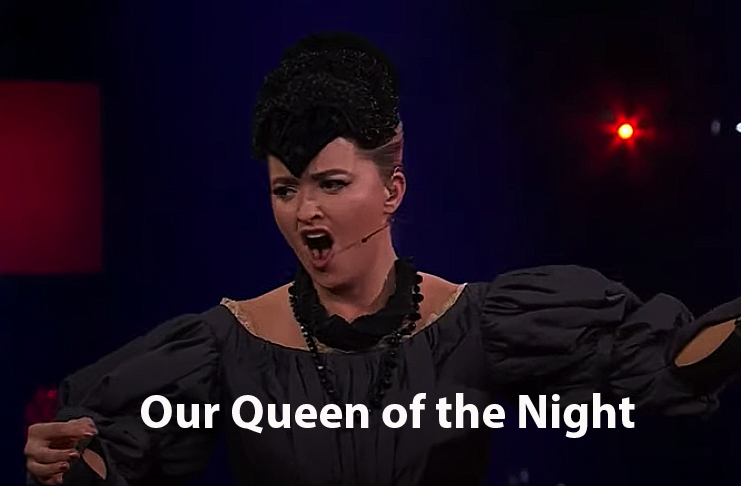 For the past four Saturdays, Alexandra has knocked us over with her fullhearted energetic performances in the Norwegian TV battle show, “Battle of the Stars” (Stjernekamp).

With the first category being POP, she started out with her KEiiNOfied version of Coldplay’s “Viva la Vida”, which she afterwards released as a solo single through all streaming and music-shopping platforms online. A fantastic performance where we had the pleasure of hearing her hit the high notes with her ever so strong and beautiful voice.

Since it was the premiere program of the 10th season of Stjernekamp, none of the stars was voted out but all continued to the weekend after, where the category was stadionrock. Alexandra gave a headbanging performance of Europe’s “The Final Countdown” where she gave all she had inside her, and it was obvious she had the time of her life and truly enjoyed being on stage.

As the fans expected, she passed through Stadionrock and on the third Saturday, she blessed us with Norwegian singer Sondre Justad’s “Ikke som de andre”, a strong and beautiful song that clearly was an emotional challenge for her to sing. An emotional challenge that rubbed off on us fans who were also left with emotional tears and lumps in our throats and afterwards also left with a feeling of being hit of exhaustion from having been drawn so emotionally into her performance that it was almost unreal. She tugged on all our heartstrings performing this beautiful song.  “Ikke som de andre” was also released as a solo single on all available platforms after the show.

Last night, the fourth Saturday, the theme was opera. This was something we all had been very excited to watch since it’s a difficult challenge for anyone who doesn’t sing opera as a daily performance. All singers performed amazingly, but Alexandra overshone every single one of the others.  She performed with the aria, “Queen of the Night”, from the opera “The Magic Flute” by Wolfgang Amadeus Mozart. The way she lived herself into the role of the evil mother was unreal. If we didn’t know any better, we would have thought Alexandra was a professional opera singer. Personally, I can definitely see her in various musicals later on in her life. The judges were amazed. First Rein Alexander rose from his chair giving Alexandra a standing ovation, and the other two judges followed his example. At first, he didn’t know what to say to her, words simply failed him. With good reason. Her performance really WAS out of this world. The third judge announced: NOONE can do what you do, Alexandra. This is probably THE biggest compliment any star can receive from a professional judge. Congratulations, Alexandra, you truly deserve this.

Our Queen of the Night passed through this chapter also, so next weekend we will be seeing her performing in the Country genre. Good luck, Girl. We know you can do it.