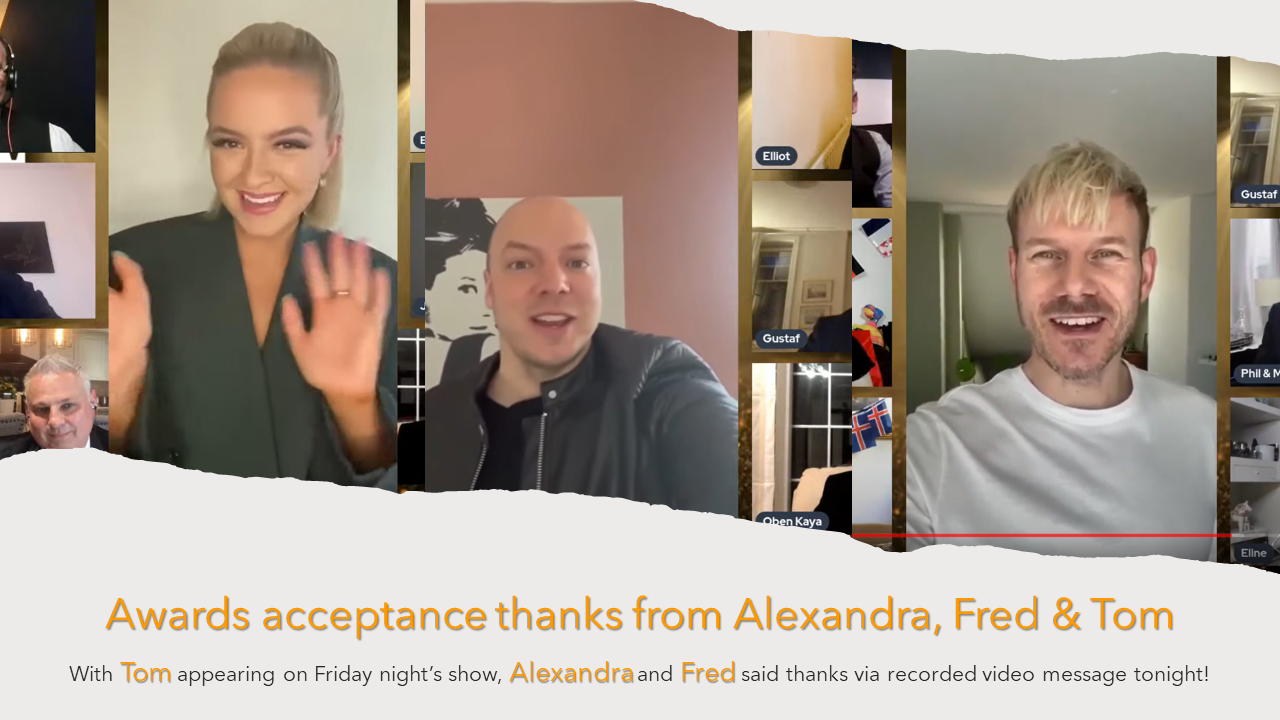 Tonight we were once again treated to a really funny, entertaining and at times… risqué show from Stuart, Tom, Sean & Co. – aka the great panel for the second night of the 2021 ESC FAN TV Awards! Excitement and passions ran high, friendly insults abounded again between the high-spirited panel members, and the chat room was going nuts, to the point that co-host Tom Hughes was unable to keep up!

The VolKEiiNOs were out in force tonight, inundating the chat room with support for Tom, Fred and Alexandra, and no wonder! KEiiNO were up for three awards tonight, and had just won ‘Comeback of the Year’ on the first night of the awards, on 30 April.

The show kicked off with ‘Best Female’ (vocalist) and as our Swedish panellist Gustaf put it, ‘it was all about the Norwegian ladies’ – three out of the ten nominees were Norwegian:

The controversy around whether Alexandra should even be in this category as she is in a band while the rest of the nominees are all solo singers was soon put to rest – the chat room was awash with support, topped by a great testimony from UK panellist and fellow VolKEiiNO Sean Dwyer.

So it was a bit of a ‘fait accompli’ to see the result – Alexandra, of course, had won! And the lovely lady herself sent in a pre-recorded video message of thanks, in her trademark modest and sweet style, to the delight of the panel and hysteria of the chat room!

The second award category that our beloved trio were nominated for was ‘Best Group’. The nominations were:

Well, the panel debated this hotly as well, with even more endorsements for our guys! And it came as no surprise to anyone when the winner was revealed to be KEiiNO – that was three out of four awards in the bag!

We were treated to a video from Fred this time, who conveyed KEiiNO’s thanks in his usual warm, friendly way, saying that he ‘looked forward to see everyone on the road’, he loved us, and blowing us a kiss.

And finally, the last category for KEiiNO to be nominated in was ‘Best Non-Qualifying Song’ – so these were the best songs that didn’t qualify for ESC in their respective national selections. Here, again, Norway was the heavyweight, with no fewer than FIVE nominated songs from this year’s MGP:

For me, this was the hardest category to vote in. I was a bit torn, and I did say in the chat room that as KEiiNO had already won in three categories, I felt generous so I wouldn’t mind if one of my other three favourites in this category won. But even then, I would have struggled between Jorn (‘Faith Bloody Faith’ is one of my ‘guilty pleasures’ and my other half listens to it regularly, too), and Sweden’s Clara Klingenström and Dotter. The latter’s ‘Bulletproof’ is on my Spotify playlist often on repeat.

My dilemma was soon solved when our guys were once more revealed as the undisputed winners of the best song that hadn’t qualified. Praise was showered on ‘Monument’ and while a couple of panellists and chat room folk didn’t feel the song was that special – well, where would we be if everyone liked the same thing? – there was eventually agreement that ‘Monument’ not qualifying was the greatest disappointment and shock of the season!

Once again, Miss Rotan graced the screen in a pre-recorded video and even sang a few lines from ‘Monument’ explaining how special this song remains to them all, whilst humbly yet regally accepting the award and thanking all the fans who voted.

So here you have it – they came, they saw, they conquered. Full house, four out of four, slam dunk, done and dusted – they won it all!

*Thank you so much to ESC FAN TV for always producing highly entertaining shows and being ‘the unofficial voice of Eurovision fans everywhere. I look forward to next year’s Awards!