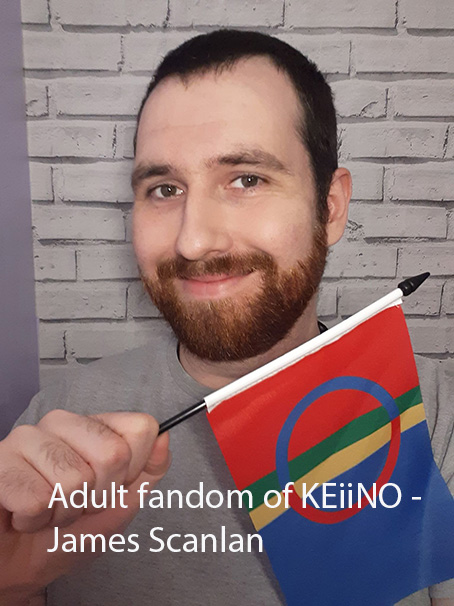 Hello! My name is James Scanlan, I’m 30 years old and I’m a writer and presenter from London in the United Kingdom.

Like many fans, my first taste of KEiiNO came at the Norsk Melodi Grand Prix final in 2019. I was live-blogging the event for Eurovision Ireland (www.eurovisionireland.net) and despite having heard the hype around Spirit in the Sky, I’d deliberately avoided listening to any of the songs in the selection so that my reactions to MGP were genuine first impressions.

I’ve said many times that Norway’s MGP is easily one of my favourite Eurovision selection events and I’m always impressed with the quality of the show and its songs. 2019 was no different, but even amongst a very strong field of contenders I was immediately blown away by KEiiNO. Firstly, anyone that knows me knows that I’m a huge fan of non-English language entries, and even if Spirit in the Sky only has a few lyrics in Northern Sami, I was delighted to hear them! But aside from making the linguist in me very happy, watching the band themselves was just a joy!

Seeing so many national selections for Eurovision over the years, you get a feel for bands that have artificially been put together and perhaps don’t actually get along once the spotlight is off. But I was struck by KEiiNO’s chemistry and how watching them was like watching three close friends have the time of their lives together on that stage. Adding that to their incredible vocals and the energy of their performance, I was mesmerised – so much so that my comment for the blog moments after their performance read “I feel like we may have just seen the winner of MGP 2019… and possibly a contender for Eurovision 2019’s crown too!”

I’ve loved foreign languages and different cultures since I was a child, and that’s only ever grown as I have! As I’ve said, I’m a big fan of music from around the world and my MP3 player is crammed full of songs in languages ranging from Icelandic to Hindi! KEiiNO’s use of Northern Sami lyrics and traditional joking in Spirit in the Sky definitely caught my attention and once I realised that was “their thing” and each new track brought a mix of fantastic modern sounds combined with joiking and lyrics in Sami, I was hooked!

I’ve always been fascinated by other cultures and was drawn to the north and Scandinavia from a young age. But Norway in particular became very special to me. Back in 2010, I went to Norway for the first time for just one day – the flights were £10 (100kr) each way and as a poor student desperate to explore the world, it was too good an opportunity to pass up! I’ve seen Norwegians smile wryly when I tell them that my first glimpse of their home country was Sandefjord in Vestfold, but those few hours in Norway made a big impression. Over the years I returned to Norway several times, making very dear friends who I love and consider my adoptive Norwegian family. While it’s been a few years now since my last visit, I’m determined to return as soon as I can. KEiiNO’s incredible music video for Monument definitely helped that decision!

This first day trip to Norway also inspired further trips to Europe on a small budget and led to me writing Europe in a Day – Day Trips to the Continent (https://www.amazon.co.uk/Europe-Day-Trips-Continent-ebook/dp/B086K3MDXN) in 2015. Featuring sightseeing tips, trivia and phrasebooks for each of the 15 countries and territories around Europe I visited as day trips, it was wonderful to be able to combine my passions for travel, discovering more about the world, foreign languages and Eurovision into a single project! This first edition of the book was so well received by its audience that I published a second, fully updated edition of Europe in a Day in 2020. This edition brought the number of day trips to different corners of the continent up 30, including places as far flung as Iceland and Gibraltar!

Following on from the success of the book, I set up a website for Europe in a Day (https://europeinaday.wordpress.com) to reach an even wider audience. As well as featuring more day trips not featured in the book, I’m also using Europe in a Day’s website to expand on the language side of things by compiling lists of words and phrases in 50 languages including several minority languages. Finding good resources in English for things like Monégasque, Low German, Manx, Greenlandic and Northern Sami is difficult and many such languages face an uncertain future in an increasingly monolingual world. I’m passionate about anything that promotes the use of minority languages and highlights indigenous culture, something I think KEiiNO have done incredibly well by bringing Sami elements to a wider audience. I’m hopeful that Europe in a Day can play its part in helping to preserve and promote such languages too.

Why is it that you spend so much time and energy on KEiiNO? Don’t you have other things to do?

As a Eurovision reporter, it’s kind of my job to keep up with KEiiNO! They are so loved and have such a big fan base, that we at Eurovision Ireland (www.eurovisionireland.net) know that whatever they’re up to, people want to know about it!

How do you feel you benefit, personally, from your efforts? (here I mean like the friendships we find with other KEiiNO fans and something good to do during these dark times of lockdowns and isolations and whatever more could be a personal benefit)

Through KEiiNO and Eurovision as a whole, I’ve made connections and friendships with people all over the planet and it’s such an amazing feeling. We all do different things, come from different places and speak different languages, but we’re all brought together by our love of music!

Lockdown during the COVID-19 Pandemic has put a stop to all my travelling which has been really difficult as I’m usually always on the move. Songs like Monument, Shallow, Would I Lie? and Black Leather have made up a sizable part of my playlist these last few months and never fail to cheer me up! Although I’ve been unable to travel, the language aspect of Europe in a Day’s website (https://europeinaday.wordpress.com) has been able to grow as a result. It’s given me the time to research, learn and produce so much more for the site. The impact of this has been twofold: Firstly, people from around the globe are accessing Europe in a Day’s website and learning more about these beautiful languages (which is incredible!) but it’s also allowed me to grow to – and I’ve learnt so much these last few months!

Part of that in particular has been a renewed interested in Sami culture and languages. I’ve always wanted to be able to speak in Sami and inspired by KEiiNO and Monument, I spoke my first words in Northern Sami this year – that alone is amazing and something I’m so excited and proud of! But what’s more, I was able to share this with my friends and taught Eurovision Ireland (www.eurovisionireland.net) some basic phrases too in a YouTube video, the feedback from which has been amazing!

What are your hopes for the future of KEiiNO and how would you continue to contribute towards that?

Well, I would LOVE for KEiiNO to return to Eurovision someday! I’m still slightly stunned that 2021 wasn’t that year, but I guess it wasn’t meant to be. Things happen for a reason and I’ve no doubt KEiiNO will continue to grow from strength to strength. I think the biggest thing I hope for the band is that they continue to record incredible music and to keep being the beacon for hope that they are for so many people.

If I could ever speak to the band, I’d want to thank them. Thank them for all their incredible songs that I’ve enjoyed so much, but also thank them because I know just how much their music has helped people. Music has an incredible power to lift us, to heal us, and to give us the words we can’t find ourselves and so many people have shared stories with me of how KEiiNO and their music have done this for them. I wonder if the band realise how happy they make people and just how much good they do simply by being themselves?As far as my contributions are concerned, KEiiNO always have friends at Eurovision Ireland (www.eurovisionireland.net) and we’ll be eagerly waiting to see what they do next to share it with our readers! In addition, Europe in a Day’s website (https://europeinaday.wordpress.com) will continue to expand its language resources for Northern Sami to promote this beautiful language and make it more readily available to English speakers. I’m also extremely interested in the possibility of taking a day trip to Sápmi once the lockdown is over… so watch this space!