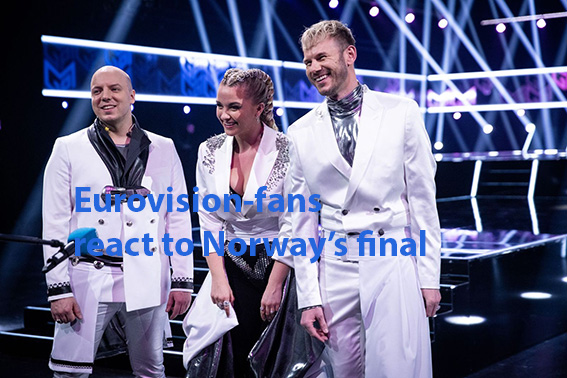 Both the voting problems and the competition itself have during this year’s Melodi Grand Prix, created a stir. On Saturday night, it was between TIX and KEiiNO in the gold final, but it was in the end Tix who could adorn himself with the title as the winner of the Melodi Grand Prix 2021.

He is Norway’s contribution to Eurovision in Rotterdam in May with the song “Ut av mørket”, which he had converted into English during the performance on Saturday night – “Fallen Angel”. However, not everyone in Europe is happy with who won the Norwegian final.

The comments during a post on the Facebook page Eurovision Song Contest, show that there were many Eurovision fans who had envisioned the favorites, KEiiNO, further in the competition.

– Monument is epic. I’m disappointed because they didn’t win. “Fallen Angel” is a nice song, but when you compare it to Monument, I just do not understand why it won. Monument had a real chance to become the winning song, one writes.

– Without KEiiNO and Monument as an option, this would be an average / good choice. But with KEiiNO, this is a disaster, writes another.

Some believe it is the student-song career of TIX that has provided the votes, while others boast of both the winning song and the man behind it. Consistent among the over 1300 comments, however, is that it was KEiiNO that was to be sent to the semifinals.

– Norway, what have you done?

Also on Twitter, the reactions have hailed from the international Eurovision audience, who became acquainted with KEiiNO when they represented Norway in the final in 2019. Many believe that Norway’s chances of reaching a new final were by far the greatest with KEiiNO.

– Norway had only one job. KEiiNO was robbed again, writes a Greek supporter who clearly followed the Norwegian final.

– I do not speak Norwegian, but I know what a theft looks like, writes another.

– Keiino could have won Eurovision … Norway, what have you done? writes another supporter, who also seems to be sad about the case.

Could have won the whole thing

Preben Hellvik is an MGP expert for Unibet. He tells Nettavisen that he has seen many of the reactions since Saturday’s Melodi Grand Prix final at Fornebu.

– But the reactions that have come are not about TIX. It is more about people who think of the Eurovision Song Contest as a competition, believe that KEiiNO had a song that could fight for the victory in a final, he says to Nettavisen.

He thinks it is surprising that it was not KEiiNO who ran away with the semi-final ticket, and points out, among other things, that the group is already very popular in Europe, and that they were the ones who got the most viewers in the European competition in 2019. KEiiNO finished sixth. in the final then.

Hellvik is keen to point out that he believes it is a good song Norway has now sent on to the European competition, but that he agrees with the Facebook and Twitter users who believe that our final chances are now small.

– But I am not embarrassed to send TIX in the final, and he will not shame anyone, he points out.

However, it is not just dissatisfaction to track among the fans. Some also have statements of support, and look forward to hearing TIX at Eurovision in May.

– TIX does not deserve all the hatred he has received from Eurovision fans. Yes, it was a big surprise that Keiino did not win. But in a competition, everyone can win / lose, and we should welcome all artists with a warm heart, so get over that result! writes this guy.

Another is crystal clear that “hatred” must stop here and now.

– We should all stop arguing about Norway in Eurovision 2021. Let’s just accept that Norwegians chose TIX with over 100,000 more votes. It does not matter if you prefer Keiino or TIX, stop the hatred, is the clear message from this Eurovision enthusiast.

2 thoughts on “The Eurovision-fans react to the Norwegian final: – Norway had one job to do, KEiiNO was robbed again”