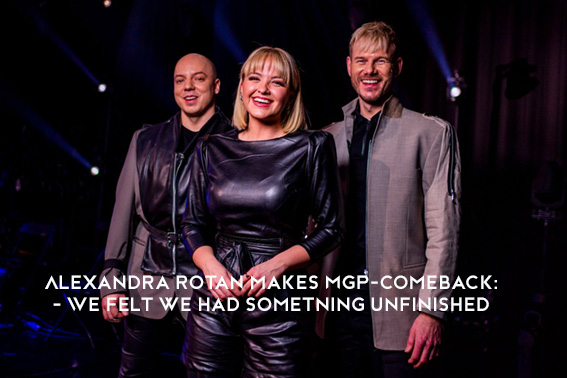 Published January 11th, 2021, in rb.no Translated from Norwegian to English by Karina Brandt

Already after the final in 2019, Alexandra Rotan and the others in KEiiNO knew that they were not done with Melodi Grand Prix (Norway’s national selection for ESC/red.) They wanted to try again, they just didn’t know when.

Today, ten of the artists who are participating in this year’s Melodi Grand Prix announced and among them were the Norwegian-Sámi group, KEiiNO, which consists of the Råholt-girl, Alexandra Rotan, the Sámi songwriter and rapper, Fred Buljo and singer-songwriter Tom Hugo.

— We kind of already knew straight after the final in Tel Aviv in 2019. We felt we weren’t finished with Melodi Grand Prix and that we would come back later with a new song, Alexandra Rotan says.

KEiiNO was formed in 2018, and back then none of the group members knew one another beforehand. After the success with “Spirit in the sky” they have toured and released more singles and albums.

— I feel we know one another better now than we did when we were with SITS and we have also found the right song to compete with, Rotan says.

KEiiNO did well in the international final in Tel Aviv in 2019 with the song, “Spirit in the sky”. They ended up in sixth place after having won the televoting.

After the final in Tel Aviv, they had planned when and with which song they would make their MGP-comeback. Last summer they met in a cabin by the coast of the Sørland and had a songwriting workshop and there the song, “Monument” was conceived. It is written by the members of KEiiNO in collaboration with the Norwegian songwriter, Alexander Olsson.

— The song is about what is left after a life has ended. Which relations and which experiences affect a person’s life. It is in many ways a tribute to the everyday heroes, all those who don’t get a statue raised after their death, Alexandra Rotan says.

She is looking very much forward to participating in this year’s Melodi Grand Prix.

— I love Eurovision, and it is going to be so fantastic to stand on the stage Saturday and perform the song, she says.

She reveals that “Monument” is an electro-pop song which contains both joik and Sámi rapp in addition to strings from a symphonic orchestra.

— It’s a song that represents KEiiNO very well, she says.

A “health plan” in dark times

NRK presents a record number of artists, entire 26, and hopes that the MGP-circus will become a bright spot in dark times. MGP-general Sig Karlsen from the Rælling calls this year’s MGP a “health plan” for the Norwegian people.

— We simply need a large musical party in the middle of all these heavy news, a break from worries about future, job and health, he says to NRK.

Goes straight to the final

In the first part-final the coming Saturday, it’s KEiiNO and Tix who are performing their songs. Both are pre-qualified and go straight to the final. Of course Alexandra Rotan hopes that KEiiNO goes all the way to the top in the competition, but admits it will be a hard run.

— Of course we are going for the victory, but it is quite the line of artists who are competing this year. Which is extra fun is that I know almost all of them so this will be very funny, Alexandra Rotan says.

The four artists who are battling for a spot in the final in the first part final Saturday, is Stina Talling, Jorn (Jørn Lande), Blåsemafian/HAzel and Beady Belle (Beate S. Lech).