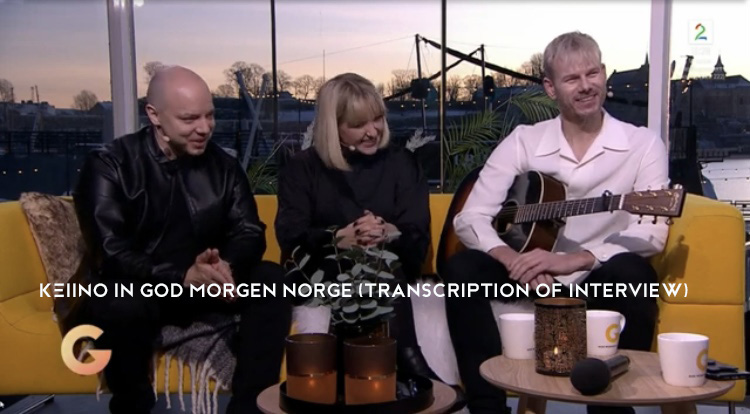 Vår (the host): One can almost feel the need for revenge in the studio now, because our three next guests…, almost won the ESC in 2019, after receiving the most public votes.

But they ended up in 6th place, so here are three people who can hardly wait for the MGP (ESC) to start again. We shall not talk a lot about what happened in 2019, but we have to go there as well of course. Welcome, Tom Hugo, Alexandra and Fred, you look so happy! How long have you waited for this week?

Alexandra: Loong! We knew already last year that we should participate in the MGP, but today our song is released also. It has been some nervous days, we are very excited about what people think of it.

Vår: We will get an acoustic version of the song soon, but Tom, 2019, do you feel that you were the actual winners?

Tom Hugo: We won the audience, but not the judges. It was like a ski jump, we jumped all the way down, set a record, but the style was not enough for the jury to give us top score. So now we are back and hopefully able to convince the jury as well.

Vår: The national MGP starts tomorrow, and you are pre-qualified and can just play for fun, Fred.

Fred: Yes, we get to play the song, but we’ll do it as it was a semi-final so that people get the full feel of the song as if it was the finals.

Vår: Tell about the song, Tom, it was conceived at a rather “bubbly” cabin trip, or?

Tom Hugo: Not THAT bubbly, but it is important to have a good time when we work together. I was cooking food, Fred had a glass of red wine and was a little philosophical and said, “What is left of us after a life lived”? And Alex who is also in the songwriting team said, “this could be something.” And then we wrote a song about the people that enrich your lives, the experiences you have had and will remember, those that not will have monuments raised after them or street names from you, but who have meant something in peoples lives. And we started off with a plain guitar like this and ended up in a studio recording with strings and a live band.

Vår: Don’t you think this will be a little too “deep” for ESC?

Alexandra: We don’t think that the feedback we have received up till now indicates that this is an important topic. Normally we don’t think about the everyday heroes, so this is a salute to them.

Tom Hugo: No matter how dark the topic is.., we are happy people and the songs turn out happy anyway. I don’t think that we can write a really sad song.

Vår: You are such a good and friendly team, you have been good friends for just 2.5 years, and work so well together despite some age differences, geographical distances and your life situations in general. And you are blessed with the voice of Erling Braut Haaland himself (Norwegian footballer, like Beckham-type God) as the captain of this team.

Tom Hugo: The voice of Alexandra is just fantastic, I am incredibly happy to be a part of a band with Alex, but also, of course, Fred who joiks and raps like a God!

Fred: Thank you, the same to you.

Alexandra: And you to Tom. I think we complement each other in a good way, both musically and with the life values we have.

Vår: And now the “Monument” is out, and we will get a preview of it here in a minimized acoustic version.