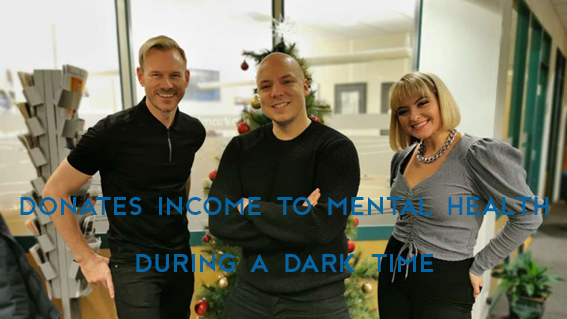 – It is very important after this difficult year, and when we come to a time where a lot of people feel very alone, KEiiNO thinks.

The reigning favourites of the audience from the Eurovision Song Contest, visited Alta this weekend, to spread the Christmas spirit and singing on City Scene. Only 50 people were allowed at each of the two concerts, one of which was part of the tour “Christmas Spirit In The Sky”.

With them, they had their new single, “A Winter’s Night“, which was released about a month ago. The trio, Fred Buljo, Alexandra Rotan and Tom Hugo actually wrote the song this summer.

– But when we started writing the song, we felt there was something wintery about it. Then the story got pretty sad. It’s about loneliness, about someone going into the dark period without anyone. At the same time, the song is like a warm blanket that you cover yourself with because there is a spark of hope there anyway. In any case, we think it’s a very nice thing with this song, KEiiNO says.

— “A Winter’s Night” is about missing someone you love.

With this in mind, we also chose to donate half of the income from, “A Winter’s Night”, to Mental Helse (Mental Health organisation in Norway), and the fantastic work they do. It is very important after this heavy year, and when we enter a period where many feel very alone, Rotan points out.

It has also been a difficult year for KEiiNO. They had to adapt like everyone else, which means that at some point they had to stop working.

– It was very heavy in the beginning, and we already noticed at that point, what has made us feel so great nice the last year. This is because we have been able to travel, meet people and perform on several stages. And when we were not allowed to do so, we felt that we got a little splinter inside us.

Tom Hugo went into a black pit for the first time in his life and wasn’t able to see any bright spots at all.

– But I got help, and when the summer came I felt that I was in balance again. But there are many who have felt a lot worse, he says and continues:

– It became easier to think of all the others who need a little attention, especially at Christmas. So my suggestion is to call people if you suddenly think of someone. I have experienced that someone calls out of nowhere, you become so happy!

One song a month

The group has spent the corona year writing a lot of new music and has other projects they can’t talk a lot about yet. But the production is going so well that the plan is to release one song a month.

– We have the first few ready, we have recorded both in Sørlandet and up here in Alta. We have a lot of good things that we want to show to people, the MGP winners promise.

At the beginning of the year, the album “OKTA” was released, there was supposed to be a tour following the release.

– We didn’t do that, so now we really hope that the songs have settled with people around the world so that we can go around and play them live.