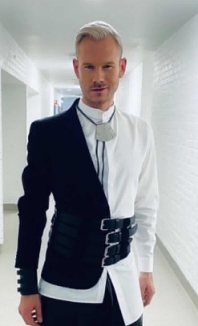 Tom was born on October 27th1979 in Kristiansand in Norway. He has a six-year younger sister.
He has been active on the scene since 2007 as a singer and songwriter, and has lived in Germany for some years now, along with his husband Alexander Olsson, whom he married after ten year’s relationship on December 4th 2018.

Tom has previously taken part of the Norweigan Melodigrandprix. First in 2013 with the song, “Det er du” (English version called “It is you”), but he didn’t qualify for the final. In 2018 he participated again, this time with the song “I like I like I like” in 2018, but again he didn’t qualify for the Gold final. In 2019 he entered with Fred and Alexandra as the band, KEiiNO, with “Spirit in the sky”, which we all know by now, they won the Golden final in Norway, and also won the televotes in Tel Aviv on May 18th 2019.

Tom is a member of the Norweigan coverband, Radiojam, which consists of top educated musicians, and they cover pop, rock, disco and country.

Tom has co-written a lot of songs for other artists, such as TVXQ in Asia, SHINEee, Y’akoto and Meg Pfeiffer and others.

Tom has his own record label, Hugoworld AS, from which KEiiNO’s songs are also released as well as their merchandise is sold from. (Go to Keiino’s shop)