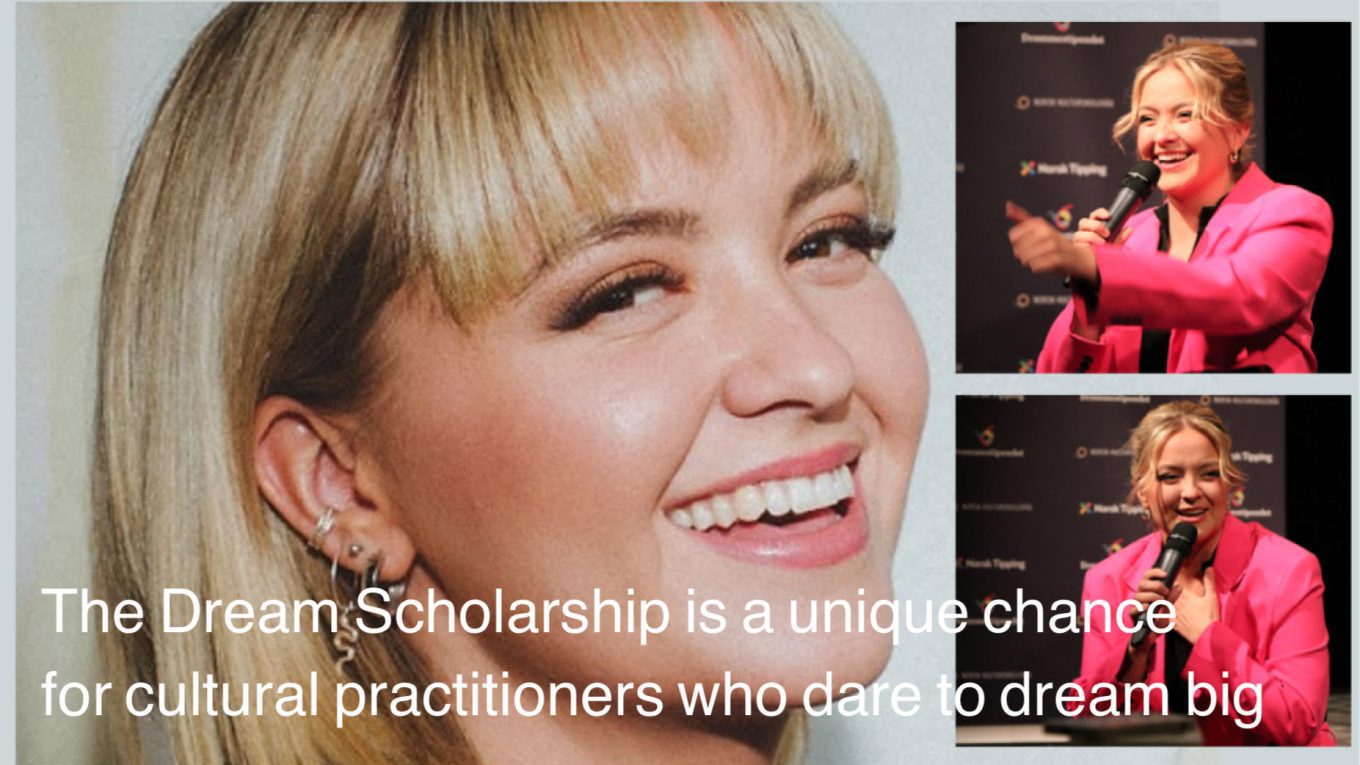 EIDSVOLL: She has been a smash hit with the band KEIINO and established herself as one of the country’s most popular artists. Alexandra Rotan herself has no doubt that the ability to dream big has been important to her now living solely on music. Therefore, the chairman of the jury for the Dream Scholarship 2023 hopes that young artists and cultural practitioners will make the trip to the application portal by Tuesday 15 November at 12.00 and give themselves the chance to become one of 50 scholarship winners in 2023.

– It was incredibly fun to be asked to lead the dream scholarship jury. I’m really looking forward to seeing what skills and exciting dreams are stirring out there so that I can contribute to young cultural practitioners getting help to live them out, says Alexandra. It has not been many years since the jury leader herself dreamed of turning her passion into a livelihood. The road ahead has not been straight and easy to walk, the journey has included setbacks, doubts and a lack of faith.

Alexandra (26) was born and raised in Råholt in Eidsvoll municipality. As a ten-year-old, she began receiving singing lessons from Hilde Mehlum at the municipal cultural school. She still remembers her first culture school performance at Kulturkafé Henrik and the feeling of mastery when she hit the highest note in “Gabriella’s song”. – The cultural school was the starting point for my career. There I laid the foundations, developed my talent and had the opportunity to perform and feel the extremely important feeling of mastery. “Gabriella’s song”, which has a very demanding ending, is a song I still perform. Partly because it is beautiful, but also because it means a lot to me as a reminder of where it all began, says Alexandra. One autumn evening in 2009, Alexandra sat with her mother and watched TV. A reminder appeared on the screen that there was still time for applying to participate in MGPjr. 13-year-old Alexandra, who already had a bunch of self-written songs lying around, immediately got down to business. She selected her favourite song, translated the lyrics from English to Norwegian, and submitted it. In the new year, she was called in for an audition, and when the MGPjr final took place in Oslo Spektrum in 2010, Alexandra was one of the finalists. It was a career-defining moment. – To be part of such a large and professional production, and to be able to stand on stage in sequins and bling and perform “Det vi vil” in front of a packed hall, was absolutely magical. Nothing I had experienced before could compare to singing in front of thousands of people in such a setting, and I decided then and there: This is the dream, this is what I will do for the rest of my life, says Alexandra.

The art of being true to yourself

The MGPjr participation ended in fourth place. But the production people didn’t just notice Alexandra’s talent, they also saw how much the girl got out of the performance and how dedicated she was. This allowed her to tour with the MGPjr circus for the next three years. – Those were fantastic years, where I learned a lot and got a taste for touring life. But when I was approaching the age where I would be too old for the concept, I was offered to continue as a background singer – which I declined, says Alexandra. For someone who was known to say yes to pretty much everything, it was a long shot to turn down the offer. To hold a role “in the shadow” of other artists was never part of the dream of the 17-year-old from Eidsvoll. She wanted to have her name on the poster and be the front person. – Being true to yourself is actually one of the best pieces of advice I can give young cultural practitioners. Because you will be asked to do things that are not compatible with your own ambitions. There will be situations where you are forced to make difficult choices. It’s about being aware of what you want and following your dream. Do what brings you joy, and do it with pride, advises Alexandra.

Alexandra’s next television appearance came with Idol participation in 2016. She made it to the first live broadcast. There she went out – and is devastated. Idol would give her the breakthrough, she had thought – and be the way into the music industry. – I sought comfort from my parents, who have been an enormous support for me throughout my career. After wiping away tears, I decided that I had to be proactive if something happened. So I sent an email to Gunnar Greve (music producer and former Idol judge, editor’s note), who put me in touch with Alan Walker, who was looking for a vocalist. So yes, I lost Idol, but I got to live out the musician dream and the superstar life on the biggest stages in Europe, Mexico, China and Indonesia, says Alexandra. As is well known, many roads lead to Rome, and Alexandra has no doubt that the Dream Scholarship can be the gateway to a road that leads to something great. – If one road disappears under your feet, you have to find a new one. With the Dream Scholarship comes recognition and exposure, which is worth its weight in gold. And NOK 30,000 is a lot of money when you are in the establishment phase, says Alexandra, who believes that the application process is also a useful exercise and important experience to take with you further. – We creative people tend to have overstimulated brains, and then it might be wise to clarify where you are on the career timeline, say, what you dream of achieving – and then specify the sub-goals. Take it from someone who applied for the Dream Scholarship in 2013, but didn’t quite make it, Alexandra says with a laugh.

The phone call that changed everything

After touring with Alan Walker for a year, Alexandra was back in Norway. The calendar was tipping over to 2018, and three months into the new year she entered the MGP stage together with Stella Mwangi and the song, “You Got Me”. It comes in third place, and Alexandra returns home to Råholt, without any idea what she is going to do. The only sure thing was that the dream of making a living from music was stronger than ever. She sent e-mails to several record companies without receiving a reply. She got the occasional singing assignment, but beyond that little happened on Alexandra’s artist front. The pop star life she lived a few months earlier seemed more and more distant every day. When autumn came, she embarked on nursing education, which had long been her backup plan. Then she got a phone call that turned everything upside down. – A very nice Southerner (songwriter and singer Tom Hugo, editor’s note) wondered if I would like to form a band together with him and Fred Buljo (rapper, joiker and songwriter, editor’s note). At the time, the big musician’s dream was still to stand on his own two feet as a performing artist and songwriter, but after conferring with Stig Karlsen (project manager and music manager for MGP, editor’s note) I chose to take up the offer. Little did I know that this particular decision would change everything, says Alexandra. The pop group KEIINO was formed without the band members having met each other physically. The group competed in MGP 2019, and won – with the song “Spirit in the Sky”. This led to participation in the European Song Contest in May. – None of us had predicted this smashing success. It was simply crazy to perform in Tel Aviv, and at the same time know that 220 million television viewers followed the broadcast. We had worked very hard and then, of course, it tasted extra good to collect the most audience votes, which made being number six feel like we had won the whole thing, says Alexandra.

“Spirit in the Sky” later went to the top of the VG list and was nominated for the Spellemannpris, in the Song of the Year category. After the Eurovision Contest, KEIINO released several singles as well as the album “OKTA”. In 2021, the group participated again in MGP, and then came second in the Norwegian final, beaten by TIX. For Alexandra, the success meant that she has now been a full-time musician for three years. Last autumn, she enchanted TV viewers with both her voice and stage skills. This time in the NRK competition Stjernekamp, ​​where she sang her way to second place. Although Alexandra has achieved a lot in a short time, she has not stopped dreaming. – I still have big ambitions in music. The dream is to continue writing and producing good music with KEINO, give the audience great musical moments and have the whole world as a workplace. As for the solo career, I want to explore different genres and try to crack the songwriting code, and find my special musical expression, says Alexandra, who emphasizes that talent alone is never enough.