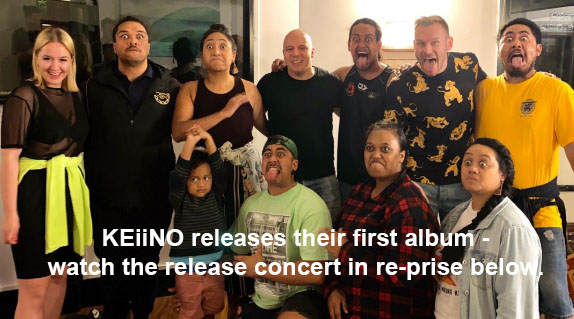 From nrk.no May 15th, 2020, by Kolbjørn Norvang, Music journalist, translated from Norwegian to English by Karina brandt

— We are more than proud. “OKTA” is a manifestation of the idea that joik and pop belong together and that indegineous music  is able to reach a wide audience, says the group.

Watch the digital concert by clicking the picture below. It will open in a new window – scroll to the same area of the page and go around 8.30 minutes into the show, in the beginning there’s some technical issues, but be patient, its worth the wait.

Because of the situation in the entire world right now, a lot of artists have lost their fundamental income. During the concert it was possible to vipse or paypal a donation, while others had bought online tickets pre-concert.

It was a big moment for KEiiNO to be invited to New York by the management of FN’s permanent forum for indigenous people’s questions. There they talked about collaborating with more indigenous artists to make pop.

That they had good feedback and praise to be a part of rendering indigenous culture visible, didn’t make the moment any less.

That they had good feedback and praise to be a part of rendering indigenous culture visible, didn’t make the moment any less.

— It was really good for me to hear that we are on right track, especially with the thought that we want to treat other indigenous expressions with respect, says Buljo.

Working together across cultures isn’t always easy, but according to Fred Buljo, it wasn’t a challenge this time.

— The work process had a chemistry I have never felt before and I think we have managed to catch that energy in the songs.

KEiiNO has literally used the entire world to make the album, “OKTA”. It was recorded in Alta in North to Adelaide in the South, with help from Persons spread over 15 nations.

Listen to the album here:

The album in itself is well produced and to be honest, we had not expected anything else from KEiiNO. After all they ARE professionals.

Electronic pop has, sadly, in the eyes of this journalist, a tendency to become rather repetitive. If not the rhythm, then the sound. This said, KEiiNO actually manages to keep up the interest with variations of rhythms from song to song, even though the sound is a little too much of the same through the entire album.

Even though the sound can be a little repetitive, Tom Hugo, Alexandra Rotan and Fred Buljo such different voices that you get quite a few breaks in the sound. The four songs with guestartists also breaks up the album so well that it goes from being mediocre to good.

The favourites of the journalists: Roar Like a Lion and Black Leather.