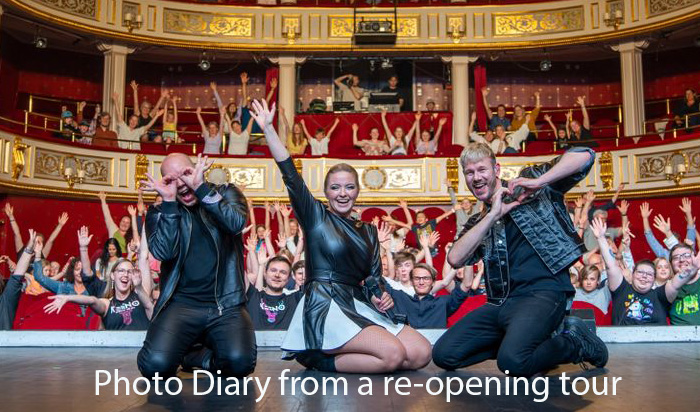 For us who are used to 200 travel days a year, the last 15 months have been like waiting to be called from customer service when it’s your turn in the phone queue.

It’s almost unreal to travel on tour again. For 17 days we will get off the tour bus in a municipality other than the one we woke up in. We will set up for a music party and meet new expectant eyes when we go out on stage every night.

For some in the hall, it will be the first concert of their life. For others something they have been looking forward to for over 15 months. For most people, concerts are a sign of normality. But until the pandemic is under control, we offer “sit dance” and alljoik for a limited number of young and old. Especially the former. Because we at KEiiNO stand behind the mantra “children and young people first” during the reopening, and therefore we travel on a family concert tour.

Many know us from the Melodi Grand Prix in 2019 and 2021. But not everyone knows that we have released 19 songs during the two and a half years we have been a band. Or that we have 70 million streams and 780,000 monthly listeners worldwide. But most people know that we are a Sámi, a lady and a gay man who makes energetic pop music with joik.

Tour life is special, and for us who are used to 200 travel days a year, the last 15 months have been like waiting to be called from customer service when it’s your turn in the phone queue. You are not completely locked into other tasks, but you can not leave the phone or sit in other conversations.

We are some of the lucky ones who have received support from the Cultural Council’s stimulation scheme, which means that we can carry out a Norway tour even though we can only have a maximum of 100 or 200 in halls that usually rooms many more people. And the response shows that the public around the country greatly appreciates being able to go to a concert and take a picture even if the one-meter must be observed.

To reduce the risk of infection in our 10-person crew, we travel by bus from a Kristiansand company. We also have quick tests with us for regular testing, so that the only thing we are infected with is joy, something the winners of this year’s MGP junior sing so well about.

We in KEiiNO run our own record company. The advantage of steering the ship yourself is that you decide the course yourself and that you are left with more money to invest in your career. The disadvantage is that you do not have financial muscles in the back during the build-up and that both artists and musicians have to do many work tasks far away from the job description.

Due to the broad support of the people, we got to represent Norway in Eurovision in 2019. The votes from Europe meant that we could establish ourselves as something more than a one-hit wonder. And even though many of the plans for 2020 were put on hold, fortunately, our followers have not forgotten us. Now we look forward to the future and look forward to continuing to spread joik and pop joy across the pretty country.

One thought on “Photo Diary from a re-opening tour”