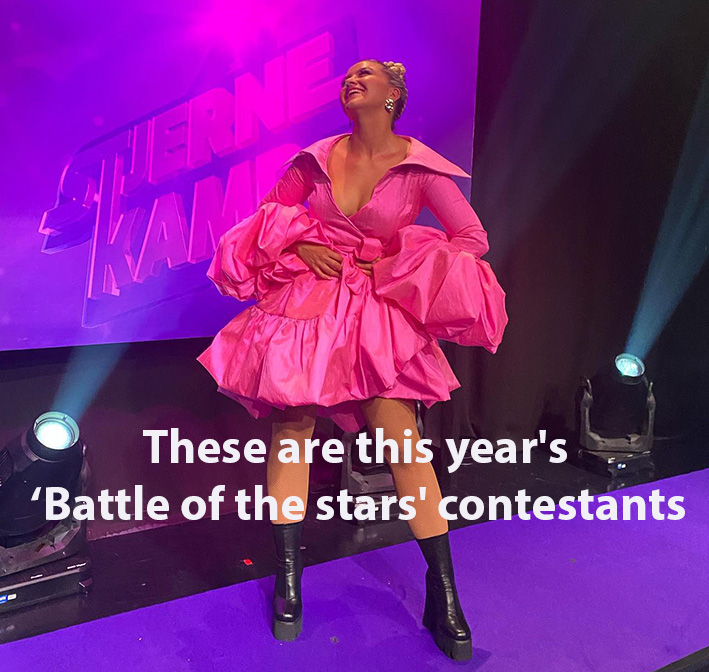 “Idol” winner, Trønder rocker and Eurovision finalist are among this year’s “Battle of the stars” participants.

For the tenth year in a row, the NRK program “Battle of the stars” is rolling on the TV screen this autumn. Participants must strive to perform music in various genres, create entertaining stage shows and not least receive juicy judge comments.

In the end, only one of the ten participants can adorn himself with the “Battle of the stars” gold. Last year, it was Knut Marius Djupvik who won the viewers’ hearts after a thriller of a finale.

On Thursday, host Kåre Magnus Bergh presented the ten artists who will compete against each other this time.

– We have had 100 artists in the last ten years, and 750 performances, cheers Kåre Magnus Bergh.

The premiere is on August 28, and Bergh reveals that in addition to the show that takes place on Saturday nights, there will also be a separate online series where you get to know the artists better.

Mona B. Riise will be a permanent judge on the judging panel.

Here are this year’s participants:

Torsvik became seriously known to the Norwegian audience when he won the very first season of “X Factor” in 2009. He has gradually made a career with catchy Trønder rock.

– It’s great to be with this gang here. I am moved, says Torsvik.

He thinks the audience will find it exciting to see him sing opera, and that is what he is most looking forward to showing off.

– It will probably be something other than what I do normally. I’m terrified of that genre, he says with a laugh.

Most people know Alexandra Rotan from KEiiNO where she constantly impresses with her powerful voice. Together with KEiiNO, she represented Norway in the Eurovision Song Contest in 2019 in Tel Aviv in Israel.

– I look forward! Even though I stand alone, it feels like I have KEiiNO in my back, she says.

Christensen became known as a guitarist and vocalist in the rock band Seigmen on 1990 talent. Since then, he has trained as a classical singer, and in recent years has performed in several productions at the Norwegian Opera. Among other things, he was a soloist as Tamino in The Magic Flute 2006.

– I both look forward and dread to sing opera, he says.

Kumoji has several strings to play on. She is a singer, voice actress and musical artist. She has played in several musicals, but the breakthrough came when in 2019 she participated in the Melodi Grand Prix with the song «Holla».

– I did not see this coming. This is the sickest and coolest concept, and I have long hoped to be part of it. Finally the day is here!

Domaas from Bergen is a singer and songwriter, and last year released three singles that were met with rave reviews. He is still an undescribed magazine for most people, something the “Battle of the star” participation will definitely do something about.

– I think I will grow a lot on this. That is my motivation for joining. The goal is to practice as much as possible, he says.

Carina Dahl started her artist career in 2010 with her debut album «Hot Child». She has participated in MGP three times – in 2011, 2013 and 2019 and has released two albums, two EPs and about twenty singles. Among Carina’s most streamed songs are the Norwegian cover versions of “Despacito” with Adrian Jørgensen and “Shallow” (So real now) with Åge Sten Nilsen. In the last year, she has delivered a number of genuine Norwegian party pop, as the only female artist in that genre.

– The best I know is shows. And that you “nail” things you may not think you can do. I think that journey is very exciting, she says.

– What do you fear most? asks Bergh

– Everything, she says and laughs.

– But I’m really looking forward to the country genre.

Mbugua is an actor, dancer, singer and songwriter. He has been on several tours dancing in Norway and abroad, including as a choreographer on Nico and Vinz’s European tour in addition to several concerts in Asia. He is also a songwriter and vocalist in the band KEVZTA.

Musical star Heidi Ruud Ellingsen has made a name for herself in the productions “Singin in The Rain”, “Mary Poppins” and “Flashdance”. And she has sometimes played the prestigious role of Solveig in “Peer Gynt” at Gålå. These experiences have made her skilled in both singing, dancing and acting, and there is no bad combination in “Star Wars”.

– For a gang, she exclaims.

– I have had a lot of awe, and looked at all the years, and think that everyone who has participated has been very tough.

Finally, she confesses why she joined this year, after being asked several times before.

– Life is too short to not participate in ‘Battle of the stars’!

Tomren is a Norwegian yodeler, throat singer, folk singer, and not least a composer from Tomrefjord in Møre og Romsdal. He became known under the artist name Polkabjørn in the polka and yodeling duo Polkabjørn and Kleine Heine.

He has never seen a program of “Battle of the stars”.

– This is a mixture of discomfort and nervousness and I look forward to singing, he says.

Jorun Stiansen broke through with a bang when she won the Idol final in 2005 when she beat Tone Damli in the final.

– I was terrified when the phone rang, Stiansen admits.

She is still looking forward to being on stage again.

These have won “Battle of the stars’ before: