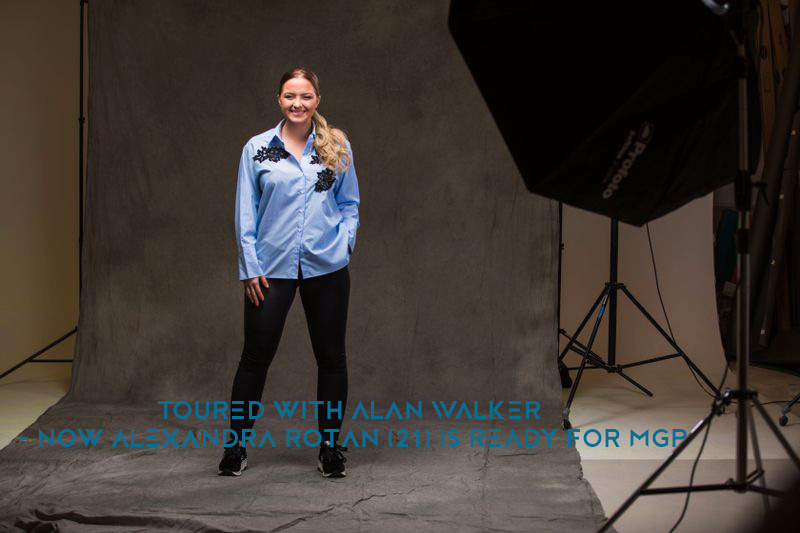 Eighteen months ago, she was standing on some of Europe’s largest scenes together with the EDM-star, Alan Walker.

— People screamed when I walked on stage.

21-year-old Alexandra Rotan participated in Melodi Grand Prix for the first time in 2010, but in the junior-version. Now she is ready to enter the scene together with Stella Mwangi in the great circus – something which was the dream all the way, she tells.

— Anything can happen. I am looking so much forward to it, she tells in a meeting with VG.

Even though Alexandra is an unknown name for most people, she has performed with the one and only Alwan Walker, during his European tour in 2017, and at other venues where he needed a vocalist. After she left Idol in 2016, she began to doubt the entire music career. Then she asked Alan Walker-manager, Gunnar Greve, for tips for her further venture. Then she was told he perhaps had a job for her.

One and a half month later I got a mail telling he wanted to use me as Alan Walker’s live vocalist. I remember I was standing in a clothes shop, then my mum called and asked “hey, what is happening now?” she laughs.

The best memory from the tour was the first concert during the Eska Music Awards in Poland.

— People were just screaming when I went up on the scene. There were many million viewers and several thousand in the audience. There I got to experience pyro for the first time, she tells proudly.

She tells that the Bergen-star is down to earth and calm.

— We talked very well together straight away. He liked what I performed and I thought it was super fun to be a part of it. It could be really funny with a new collaboration.

The next time Alexandra is on a stage is in Oslo Spektrum the 10th of march together with Stella Mwangi (31) who won the Norwegian MGP finale in 2011.

— We think we are perfectionists both of us and we are going to make the scene show as great as possible. The friendship and cooperation come naturally because we have so much fun together, she tells.

Alexandra herself is a big fan of MGP as a concept and is looking forward to seeing for her self how it ends up with the scene show.

— Finally I can be a part of a larger show where I can ask for something and then it happens. It is so cool. The first thing I told the person responsible for the show was that I want a shower of glitter, she says and laughs.

—I think it is the scene show which determines this year because there are so many strong songs, she says.

Alexandra’s daily life is, on the other hand, completely the opposite of the glam-scale. She studies to be a nurse and is currently in work practice

Other days she records songs in a studio and sometimes she sits behind the till at Coop. And the apartment on Carl Berner in Oslo, she shares with the boyfriend, Vebjørn.

—He is coming to cheer me on in Spektrum. He is looking forward to it and thinks this is really fun. It is great to have someone who backs me, cheers me on and is happy for me. It means a lot, the 21-year old says.