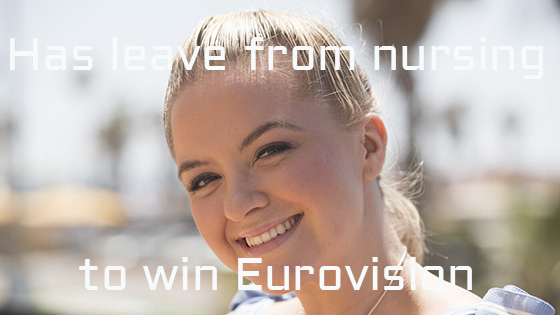 From https://sykepleien.no/ May 16th 2019
Translated by Karina Brandt

Alexandra Rotan has to sing for millions. But she was more nervous before the final evaluation in psychiatric practice.

Until Alexandra Rotan became Norway’s Eurovision hope together with the group KEiiNO, she studied nursing at Oslomet. Today, Thursday, they participate in the second semifinal of the Eurovision Song Contest, in Norway often referred to as the Melodi Grand Prix (MGP).

If Rotan and KEiiNO advance, they will compete in the final in Tel Aviv, Israel, on Saturday.

Always wanted to be a nurse

In an interview with KK, Alexandra Rotan states that she is not nervous.

– I’m excited, but not scared. I was much more nervous when I was to have a final assessment during the internship period in psychiatry in the nursing studies, she tells the magazine.

She writes in a text message to Sykepleien that she has always been involved in music and that it’s close to her heart.

– Nursing is something I have learned, and it is not just under the skin after only a year and a half at school.

She was in psychiatric practice when KEiiNO won the Norwegian final.

When she returned on Monday after the victory, many patients congratulated her. But Rotan tells KK that she herself has never taken the initiative to talk about the victory with patients.

– I have always gone on stage to give something, not to put the spotlight on myself.

She has now taken leave from her nursing studies for one year, to focus on music. In March, she told the student newspaper, Universitas, that this is an opportunity she only gets once in her life.

But in the interview with KK, she says that producers in the music industry have said that she is too boring and ordinary and that she must change the way she sings. But that it is irrelevant for her to change.

Part of a trio

In Eurovision, she sings Spirit in the sky, written by Tom Hugo and Alex Olsson. Rotan and Hugo make up KEiiNO, together with the Sami songwriter, rapper and joiker, Fred Buljo.

The three performed the song for the jury on Wednesday night, and on Thursday night they hope to be sent on from the semifinals to the finals.

– And the final evaluation in psychiatric practice, how did it go?

– It went very well, so I just have to trust myself, says Alexandra Rotan to Sykepleien.