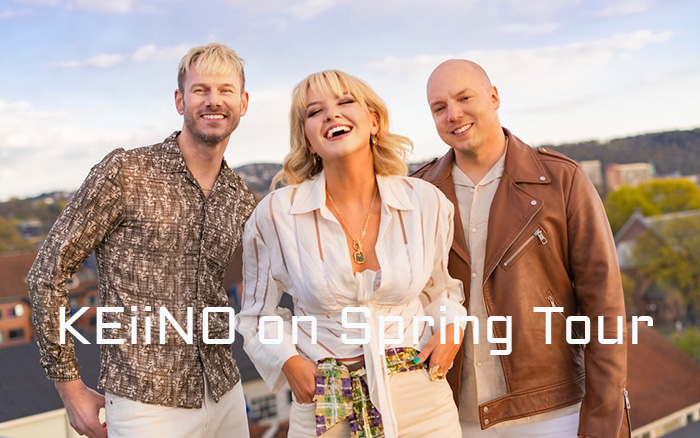 KEiiNO has since its comeback in this year’s Melodi Grand Prix been one of Norway’s most talked about bands and is high up on radio lists and top lists on Spotify. Few artists gather as diverse an audience as KEiiNO, and although children and young people are in the centre of the spring tour, the engaging live show is suitable for all age groups. The trio brings with them a band of top musicians, their uplifting pop songs and a bunch of big world hits that they “KEiiNOficate”. Alljoik and allsang guarantee!

KEIiNO debuted in MGP 2019, and the combination of danceable electro-pop and Sami joik enchanted Europe during Eurovision. “Spirit in the Sky” got the most audience votes of all, topped the VG list, was nominated for the Spellemann Prize, was on the charts in several European countries, won four Scandipop awards and two Sami Music Awards. But “Spirit in the Sky” was just the beginning of the KEiiNO adventure, and in two years KEiiNO has released 19 songs that have so far been streamed over 65 million times on Spotify. They have also toured all over Norway, played for full houses in Europe and Australia and recorded five music videos.

KEiiNO’s debut album “OKTA” was released in May 2020 with very good reviews at home and abroad. Scandipop writes: “If a better pop album is released in 2020, we’ll be shocked” and Espen Borge in NRK describes the music as rock-solid and catchy, and writes “when you have also spiced up the record with chin, throat singing and original rap, the result is an exciting approach to a genre that suffers from the weight of its own predictability “.

Before KEiiNO, Alexandra Rotan from Eidsvoll was the live vocalist for DJ star Alan Walker. Fred Buljo from Kautokeino toured with his rap duo Duolva Douttar, and Tom Hugo was the solo artist who entertained crowds in Sørlandet. In other words, they are musicians with great stage experience despite the fact that they have only been a band for two years.

One of KEiiNO’s core values ​​is the acceptance of being different and has since the beginning addressed the topic in its texts. They work to ensure that everyone in the world can feel as free as the Northern Lights dancing across the sky and that everyone can feel the joy of joiking.