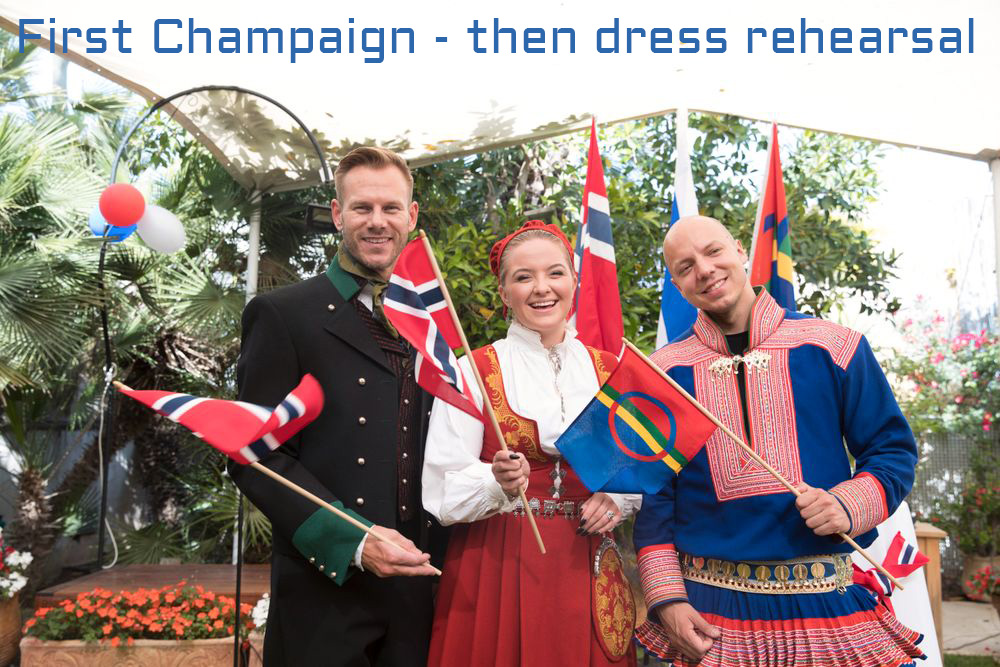 TEL AVIV (VG) Almost sleepless, but relieved to advance to tomorrow’s Eurovision final, the KEiiNO trio had to treat themselves to an ever so small champagne breakfast on National Day.

– We are in good shape, even though there was little sleep last night. But something must be prioritized when you are invited to a champagne breakfast on May 17th. Happy Birthday! says a costumed Alexandra Rotan when VG meets her at the pool area at the residence of Ambassador, Jon Hanssen-Bauer in Tel Aviv.

Present, in addition to Rotan, Fred Buljo and Tom Hugo in KEiiNO, of course, was also the Norwegian Eurovision delegation and the Norwegian press. There was no doubt that the hot air carried a stroke of relief after the nerve-wracking vote in the semifinals on Thursday night, not least because Tom Hugo sang the wrong lyrics at one point.

– I did not really doubt whether we went on, but they kept us on the torture bench for a long time. I am happy to admit that I was incredibly happy when we were called out, this means so much to me and is a dream come true, says Alexandra Rotan.

– At the press conference after the semi-final, you once again emphasized the importance of acceptance and respect for each other. Do you have the feeling that this message has reached you?

– I hope so. It has been a privilege to be able to speak in front of 200 million people that no matter who you are, how you are or what you look like, you are worth as much as everyone else, says Rotan.

She also pinches her arm a little over the fact, that on Saturday she shares the same scene as Madonna herself.

– So it’s so cool! I commented on it to my boyfriend early today too – not everyone is fortunate enough to share the stage with The Queen of Pop!

After an hour of champagne breakfast on Saturday morning, the champagne was set aside and the course was set for Tel Aviv’s Expo arena where Friday’s rehearsals, including jury tests that will count half of the votes during Saturday’s final, will be held.

The rehearsals are not finished until half-past one, night until Saturday.

– It’s an important day. The jury rehearsals are just as important to us today as they were earlier this week, says Alexandra Rotan.