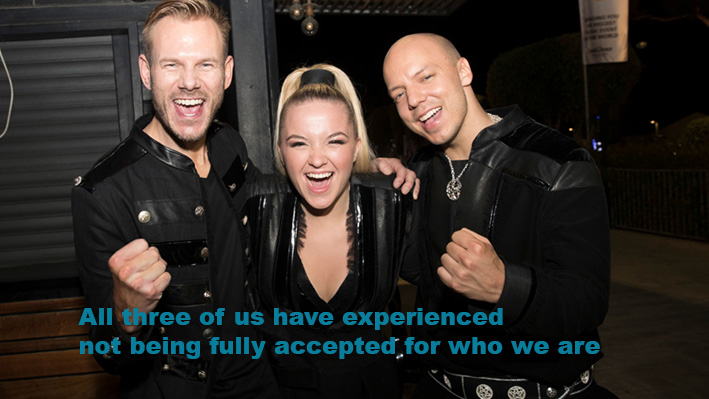 Published in Gaffa.no May 15th, 2020
Translated by Karina Brandt

In the same week, this year’s Eurovision was to take place, last year’s MGP winners will release the album that will prove that the trio was not a one-hit wonder.

– It was never a thought to quit. Eurovision was last year, but we are here, says Alexandra Rotan.

Actually, Keiino’s album debut was to be released the same week as the “Spellemann Prisen” was awarded in March. Tom Hugo was bursting with pride that a Melodi Grand Prix song had been nominated for Song of the Year, which is very unusual.

But Corona came and Spellemann was cancelled.

– We were advised to put the record on hold. After a few weeks, we started hearing from international fans, in countries where people were not allowed to go out and had to stay at home. Then Eurovision was cancelled, and then we thought, “now we release it” – as a vitamin injection for everyone who likes pop music, Tom Hugo sums up.

Friday, the day before the grand Eurovision final in Rotterdam – but where the arena instead of glittering has become a corona hospital, KEiiNO offers their first virtual concert. It will be followed by fans all over the world, according to the band – which has had a bit of a year since they first met, put together especially for the Melodi Grand Prix.

– Something clicked right away. We had not met physically before we became a band. Now we are best friends, says Alexandra Rotan and declares: – I’m glad it was us!

More seriously, Tom Hugo says that “some collaborations just feel very special.” He was the one who invited the other two from their respective solo careers – Alexandra as live vocalist for Alan Walker. Fred with the rap duo Duolva Duottar, while Tom Hugo himself composed Kpop hits.

– We share many values, such as an open attitude to diversity. All three of us have experienced not being completely accepted for who we are, or taken very seriously, the southerner says.

All three talk warmly about being a member of a group, where they can lean on each other, embrace musically broadly with their focus on Sami culture, and Alexandra says it makes them “resilient on stage”. Tom Hugo adds, with a nod to Keiino’s own diversity:

– And then no one is in the majority. Someone said about us that we were “a Sami, a gay and a lady”, he says a little ironically.

But Tom Hugo believes that music binds the world together. It does so in more ways than one when it comes to Keiino.

In March, the single “Black Leather” was released, with a music video recorded in a club environment in Berlin from “a future where gender identity and expression are no longer an obstacle to what the heart desires”. It featured not only joik – but also Inuit throat singing by Canadian indigenous artist, Charlotte Qamaniq.

“This is the first time a pop banger includes traditional singing from two indigenous cultures “, it was said about the song.

Artist proposal from the UN

The song is not alone on the debut album about expanding Keiino’s musical diversity.

The song “Would I Lie” has with the Australian duo, Electric Fields – where vocalist Zaachariaha Fielding is from the country’s indigenous people. He and KEiiNO could risked meeting in last year’s Eurovision, because Electric Fields came in second place in Australia’s qualifying competition.

On “Roar Like a Lion”, the band Te Hau Tawhiti steps in with the chin, the ceremonial expression of the New Zealand Maori. On “Louder”, Keiino invited rapper Drezus, from Canada’s first nation.

While Fred Buljo met the throat singer at the Riddu Riddu festival a few years ago, other tips came to indigenous artists from the UN itself. In the wake of the MGP victory, the Sami Parliament appointed the trio as ambassadors for the UN Year of Indigenous Languages, and they went to New York and visited the UN building.

– From Eurovision to the UN! We received a long list of suggestions for indigenous artists from all over the world, says Tom Hugo, who is fascinated by how melodies we feel are Norwegian, found in folk tunes from the other side of the globe. He feels that he “binds people together”.

KEiiNO themselves have constantly promoted the Sami culture and met open doors – not least in the world.

– After the concerts, we always tell about Sami culture. We want to break down prejudice and make it available. Then pop music is the right tool, says Fred Buljo.

KEiiNO has also been warmly received in Sapmi. All three felt included, they say in unison to NTB via FaceTime from outside the rehearsal room where they are preparing for the release concert.

The Keiino members themselves had faith in “Spirit in The Sky”, even though they stood in a corner without getting as much attention when NRK launched last year’s contributions. “Just wait,” they thought.

– You must have that faith, that desire to succeed, says Alexandra Rotan.

That’s why making an album also became important. Something that stays put. It has been given the title «Okta». Fred Buljo laughs when the question arises as to what it means.

– It is something as simple as “One” in Sami.